Wes sent the attached photo from the finish of the Dolomitinlauf. He is in yellow (not the guy in fron), with Amy Gunn to his right. 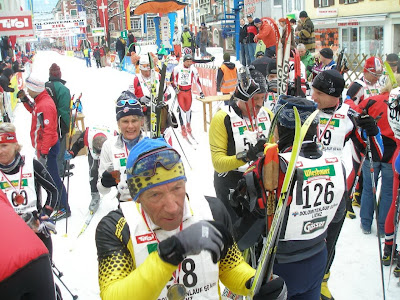 My wife Linda and I recently returned from a week's vacation where the focal point was the 60k Dolomitenlauf in . In , we met up with our friends Charlie and Amy Gunn, who were coming over from doing a marathon in the . The weather up until our last day was sunny, with highs about 33F. I highly recommend this world loppet, mostly for the great overall experience.

I had some requests that I write something up for the CSU blog and for the list server. What I’ve written is taking me some time, and is pretty long, for I thought I’d do it in two installments. Here’s the 1 st :

Our top 10 reasons to go and do the Dolomitenlauf:

We flew into and drove to on Wednesday, Jan 14 th . This was our first time in & , and while we could have taken trains, driving gave us more flexibility. More importantly, it gave us a chance to drive the fabled autobahn, where there is no posted speed limit in many sections. We generally found the 130 to 140 kph most drivers were doing in the right two lanes plenty fast, and rarely chose to indulge in going faster in the left lane, although I did briefly push our car up to 185 kph. Billboards on the autobahn show a car crushed like an accordion. We have no idea what the words on the billboard meant, but Charlie interpreted them to be “welcome to the autobahn, have a nice day”.

We try to get some minimum amount of local culture/history etc. in each day when on vacation. We were very happy to realize that rather than visiting a stuffy museum, we could just go downhill skiing, as skiing is an integral part of Austrian culture. On Thursday, we downhill skied at one of the 6 or 7 different downhill areas to choose from close to . (An example of how pervasive skiing is- there were 18 channels on the TV in one hotel room, and 3 of them had different ski jumping events on at the same time. We also saw coverage of various events occurring in Whistler on the new Olympic course, and a 30k mass start biathlon race while we were there. Downhill ski events seemed to be on continuously.)

Twenty minutes out of is the Seefeld XC ski area. This is where Bill Koch won his silver medal in 1976, and has been home to many, many world cup xc ski events. The trail network is enormous. We skied here Friday before driving on to Lienz. Linda proclaimed it the best place she’s ever skied (although, she often makes this proclamation). This may have been because of the stunning views and the technical, fun trail system. It may also have had to do with her going into one of the many trailside ski lodges, and being handed a shot of schnapps from the schnapps fountain as she walked in.

These guys have been holding sprint events for 30 years, long before they were cool. They know what they’re doing. They closed off the 800 year-old Lienz town center, constructed a course complete with a downhill starting ramp, a 15 foot climb, a corkscrew turn, a 3 foot jump, and a 180 degree turn. They also built a sound stage and put up 2 huge video screens. At about Friday night, a marching band came in playing traditional German music. This was followed by a very good rock/pop singer and then by an equally good group of 4 drummers playing intricate, imaginative sets for the crowd of about 2-3 thousand spectators. At , the cannon went off, and the 1 st of 6 qualifying heats of 5 racers began. 3 laps and 1 minute, 45 seconds later the heat was over, and the bands would start up again. 5 minutes later, the cannon would go off again, and the next heat would begin. As luck would have it, we had the best room in the house, literally. Charlie and Amy’s 3 rd floor hotel room was directly above the finish line. By leaning out the window, we could see the entire race. We did that for a while, and then went down to the street to watch the finals.

You know those wooden sleds with runners on the bottom that never worked when you tried them as a kid? We found out that they do work. A little too well. Rodeln is the name of this sport in , and it’s taken quite seriously. It involves going down sled-like runs (on groomed snow, not ice) on the modern version of these sleds on courses ranging from 2 to 12 kilometers long. They usually go down all or part of local mountains. We (Amy, Linda, and myself; Charlie had more sense) thought this would be a great rest day activity on Saturday before Sunday’s marathon, since we found out we could take the chairlift up to do the local 7k course. However, we had not internalized that dropping over 4000 feet meant we’d be going down an average grade of 18% for over 4 miles, and that this might require some effort to control our sleds. It also occurred to us as we were going up the lift that we had no idea what we were doing, and might be in over our heads. Fortunately, Amy found a young woman to ask (who just happened to be one of the people who maintains the course), and she gave us a quick lesson. In particular, she emphasized- never let go of your sled- you'll never see it again! After a beverage at the summit lodge for sustenance, we were off. 30 minutes and about 50 switchbacks later, we were done. Needless to say, our Rodeln muscles were not well trained, and Amy and I were stiff and sore the next day. However, I don't think it affected our performance, and of all the things we did in Austria, this was the most memorable.

CSU In Command at HS Qualifier

CSU was a dominant force at today's Massachusetts High School Skate Qualifier race today as can be seen in Jim Stock's photo above!

In the boy's race CSU took 7 of the top 10 and in the girl's race CSU took the top 5 slots and 6 of the top 10!! Amongst J2s CSU took 4 of the top 10 in both the boy's and girl's races. The boy's race was won by Isaac Hoenig after he and Chris Stock skiied in tandem the entire race. On the girl's side the trio of Corey Stock, Olga Golovkina and Hannah Smith took turns in the lead for the entire race until Corey put it away at the end. For J2s Jackson Rich took top honors and 3rd place overall, while Corey Stock was top J2.

Results of the races can be seen at: http://sites.google.com/a/csuski.com/csujrskiteam/Home/useful-documents 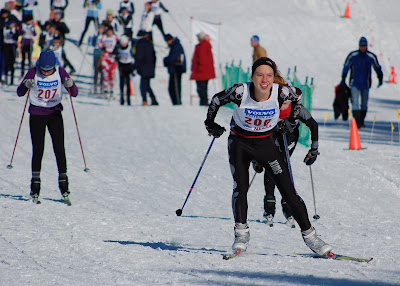 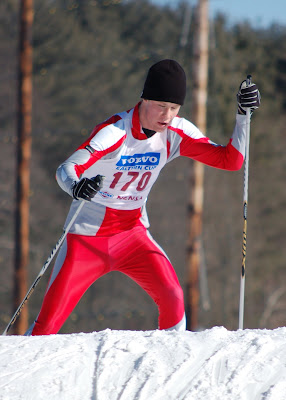 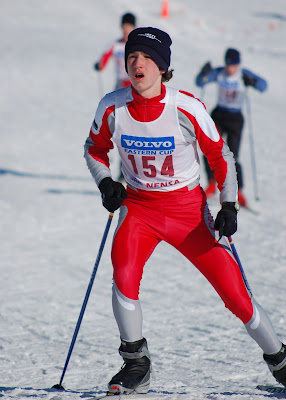 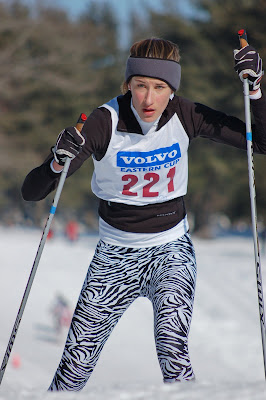 More later, but what a fantastic race! Gorgeous snow and tracks, newly widened race course and then the CSU men's team took home top prize! I don't have all the results yet and will write more when I do, but suffice it to say that Frank Feist, Rob Bradlee and Andy Milne took first in their respective age groups. I believe the CSU women finished third! A great day of skiing for all.
Posted by Jamie No comments: 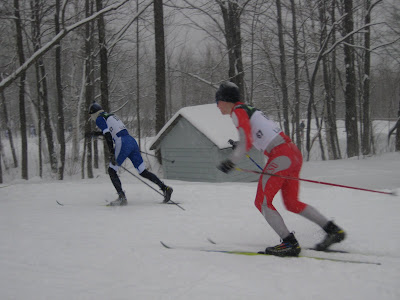 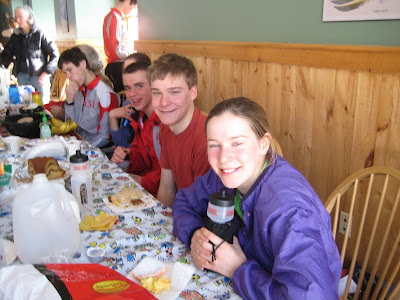 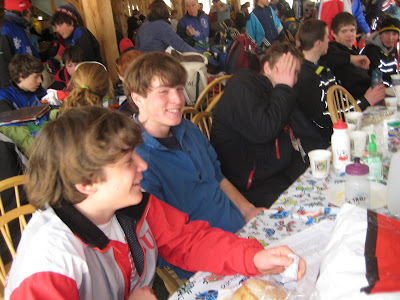 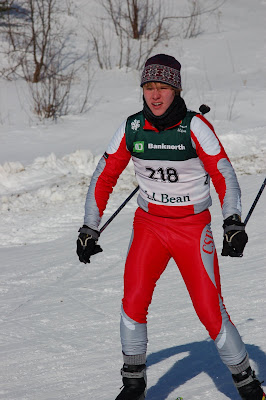 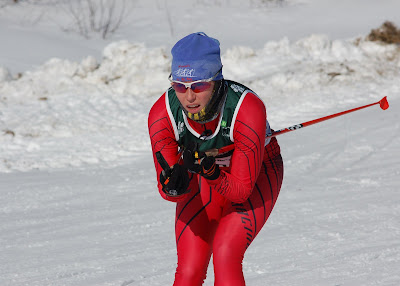 Another great weekend of skiing, if a bit on the nippy side on Saturday. As Joe Bouscaren and I drove over to Rumford from the motel we hit one pocket of -27F air......Brrrrrrrrr. Fortunately, the sun came out, there was no wind and so it was somewhat reasonable for the 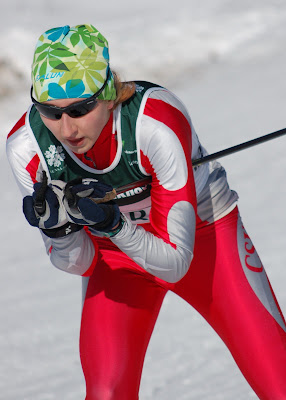 sprints as long as you kept moving. That, and I brought my down jacket that is like wearing a sleeping bag....sweeeeeeeeet.

The coaches set up waxing in the old lodge in relative comfort while the kids grabbed tables in the new lodge and we settled in for a day of sprint racing. CSU had some excellent results by the time the day was done and the sun was heading down. I'll try to post those when the results are up on NENSA.

On Sunday the temperatures had moderated. 9F on the drive over and snow falling. This time we set up for waxing under the tent at trail-side and before long it was falling at 1 inch/hour. The tracks basically disappeared and we knew the uphills would get destroyed in these mass start races. J2s did 5km, women 10km and men 15km. Wheeeee haaaaaa, 3 times up high school hill in mashed potatos for the men!!

In the J2 races CSU was awesome. The thin red line formed at the front and when the snow settled Jackson Rich took first decisively and gaining some meaure of revenge after taking 2nd in the sprints. Eli Hoenig nabbed 6th, Neil Garrison 9th, Rion O'Grady 23rd and Erik Brote 24th. On the girls side Corey Stock took 2nd, Hannah Smith 6th and Nadja Kern 10th.

In the 2 lap women's race Hilary Rich was 14th, Alex Jospe 24th and Olga Golovkina came home in 29th. It was clear from watching this race that you had to be patient and wait for things to open up to pass people without thrashing. It was also not a day where you could hammer the kick......finesse was the way to go.

Watching the men's mass start from behind as we waited for the separate master's wave was an impressive view as over 200 starters surged up the first hill in 10 long lines. I was very happy not to be a part of that confusion! We started 1 minute later and caught up to the first person from the front wave in about 1/2 km! It was difficult weaving in and out and patience was the key on lap one. That and not killing yourself on trip number one up High School Hill. Somewhere along the way Chris Burnham got his pole ripped off, but got another pole from someone. Surprisingly, the skiing and tracks got better each lap as they got skiied in. CSU's wax for the day (Ski-Go covered with Rode multi-grade green) was awesome. It kicked everywhere and wasn't slow. On lap three up the hill, between Alex Jospe and Eli Hoenig yelling at us, we got up and over thank 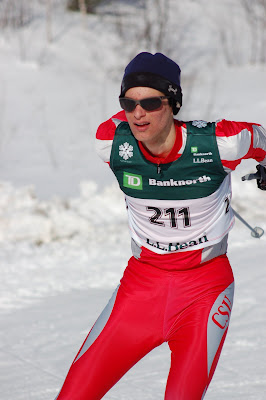 All in all a truly fun weekend. 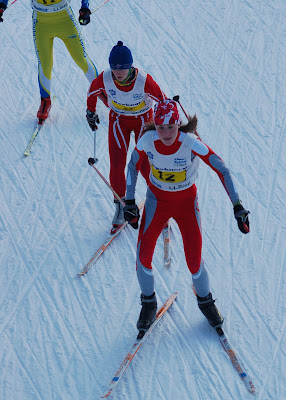 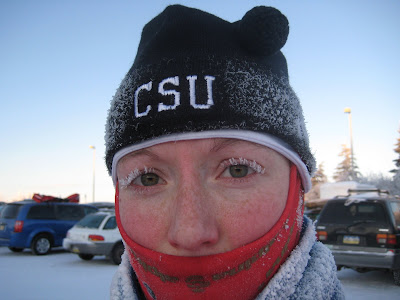 A short note from Alex, who is at Nationals up in Anchorage:

They've bumped the sprint back to tomorrow (Sunday) in hopes that it'll warm up... bummer, but I did get one great picture of me with frosty eyelashes representin' for CSU. Skiing in -14 is not as much fun as I would have imagined!
Posted by Jamie No comments:

CSU Juniors, coaches and families had a very successful 6 day trip to Mt. St. Anne for the Christmas Ski Camp. About 20 juniors were there plus a number of up and coming BKSLers and families! The weather ranged from -3F on the last morning up to about 45F and light rain, all of which made waxing a lot more challenging than the usual blue hard wax conditions we had last year. Hopefully a few skiiers learned how to apply klister covered with hard wax. Below are a few photos from the continuous pursuit time trial. Note how close Chris and Isaac are at their transition.....that was how close they were at the finish too! Other highlights included an awesome dinner at the Burnham's with the entire gang, the victory of the boys and yours truly on the tobaggan run in Quebec (weight does matter!) and a day-long power outage. The skiing was, of course, fabulous as were the lunchtime naps..... 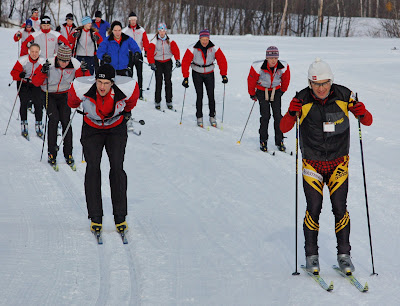 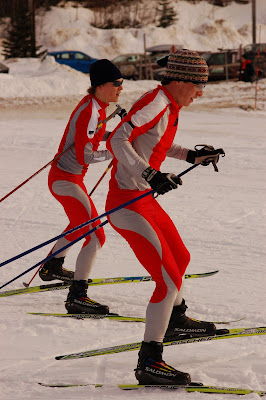 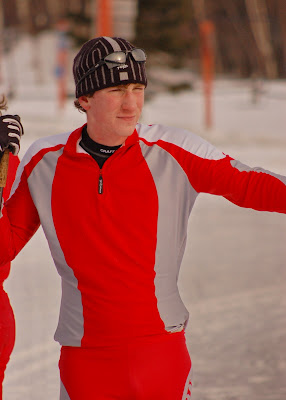 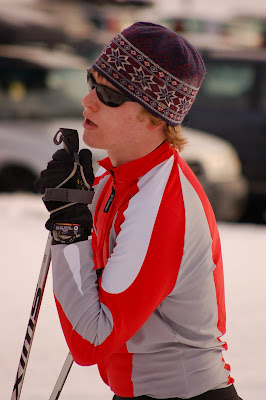 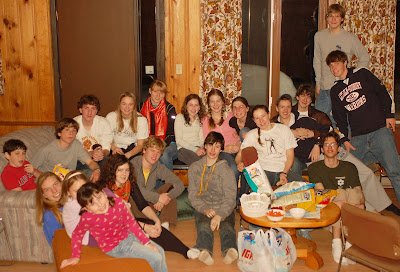 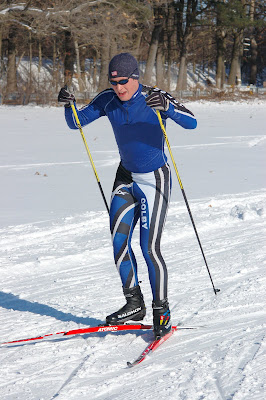 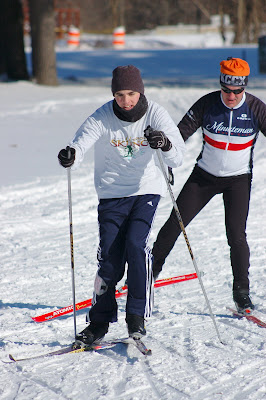 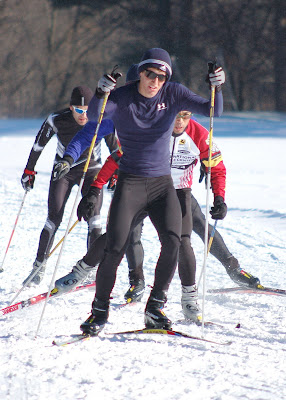 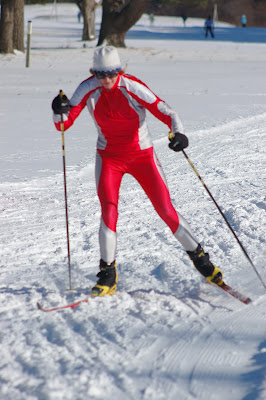 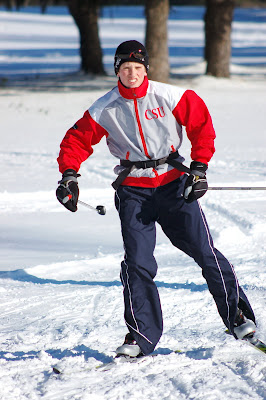 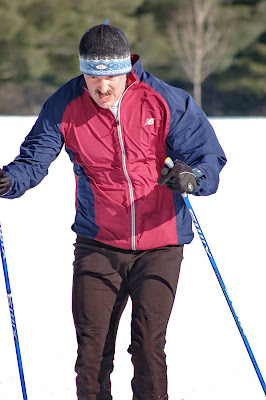 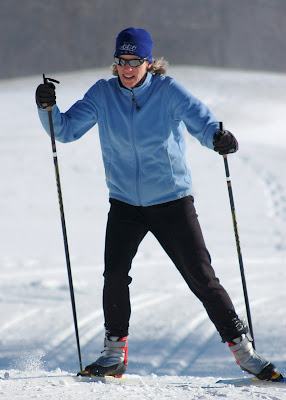