CSU Rocks at Run of the Charles

The CSU Junior team showed that DP training is good for cano racing as they trained 2 whole times and managed to come in 5th out of 60 boats and second in the overall team event this past weekend at the 36th ROTC festival.  There are several shorter events with Kayaks, Canoes and Standing paddle boards, but the main event is a 24 mile Relay Canoe race that starts near 128 in Dedham and winds along the Charles through 5 legs and 6 portages to finish in Boston right where the Head of the Charles finishes.  One if by land and two if by sea.  I wish I could have seen the canoe sprinting down the middle of Newton Lower falls as I can only imagine the team set a blistering running pace in that 1/3 mile portage.  Just think of the shoppers with their morning java.  I was highly impressed when Maile and Ben finished the last leg navigating white water and 3 portages relatively unscathed.  They took on the vaunted leg 5 which featured a small ledge and a broken dam both with standing waves that went over the bow.  The water was really high and the currents fast this year with many trees down (dangerous strainers) all along the banks, so I applaud the choice of the highly experienced Maile on the last leg.  The final time was 4 hours and 5 minutes which is surprisingly fast for the newbies.  Just getting to all the access points, finding the right bends in the river and locating the portages is an issue, especially in the fast current where staying upright in those tricky takes outs is essential.  Thanks to Wes DeNering for loaning the fast Kevlar Canoe.

The master's team combined 6 CSU skiers (Jaime, Wes, Andy, Cameron, Bob, Don) with two veteran paddlers and survived all challengers for the 16th win in a row.  16 years is really a pretty long time for the crew to keep winning given that we ski 10 X more than we paddle (except Jamie and Wes).  It is interesting that after skiing in Vt. and Norway on hills it is virtually impossible to paddle hard enough to breath hard.  You have to keep your upper body quite or the boat rocks and thus the core and arms are all that is engaged.  Regardless, Wes and Jamie are pros on the first leg, Don pulled off a the 2,3 double leg, Andy and the designated Sr. runner Cameron blistered the Newton Upper falls while Jamie and I cruised the white water to the finish with a time of 3 hours and 39 minutes.  Jamie and I did manage to dump the boat at the third pull out on our leg.  It is deep and had a big current with a tree in the one spot and a slower kayak blocking it.  I finally got out and went to stabilize the moving boat when I slipped back into deep water.  The boat went over and Jamie was out very deep in the current holding it until I could pull it to shore.  Not exactly the greatest technique, but we recovered and paddled on by that Kayaker in short order.

Canoeing is a terrific sport, clearly good for DP and there are a lot of good rivers.  We look forward to next year when Kevin graduates so that some young team does not come along a knock of the old crew.
Coach Bob 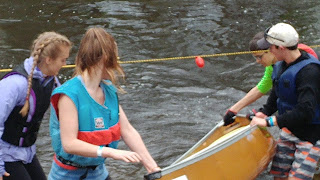 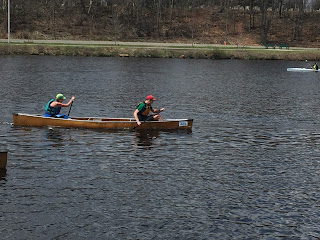 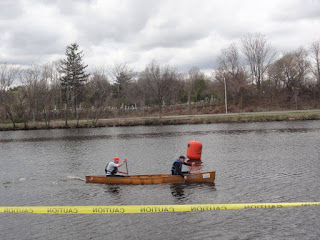 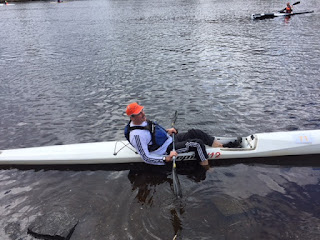 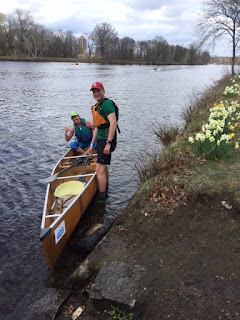 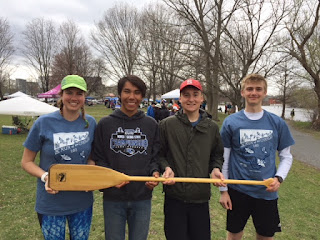