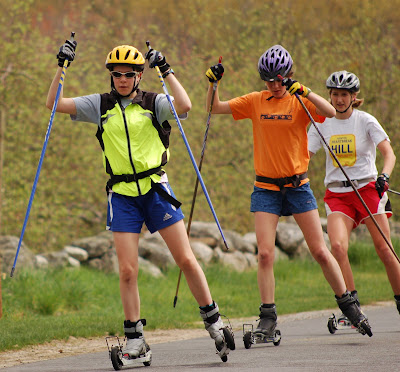 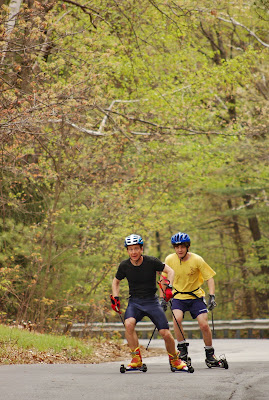 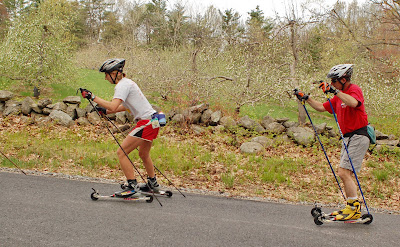 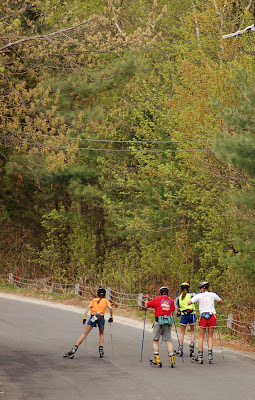 Its May, time to get crackin' on next winter!
Posted by Jamie No comments:

A Saturday with Andy 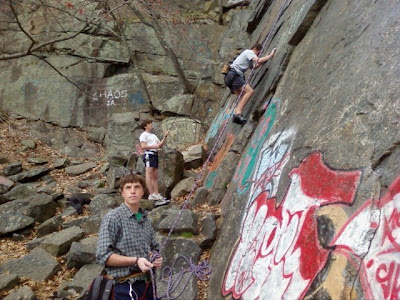 A report from a couple weeks ago from Andy Milne.

Last Saturday a small group of Juniors set off for a full day of athletic challenges. Foremost, we all got up early on a Saturday morning and met at the Whole Foods in Cambridge. Our group consisting of Marsh and Jackson Rich, Peter, Eli and Isaac Hoenig and I warmed up by running around Fresh Pond. At ten o'clock we were in a race with about forty others. The younger boys took off like a bat on frozen granular while the older set let their powerful engines warm up slowly. At about the 2 mile mark, I caught up with Eli and Jackson. We ran a good part of the race together. Isaac did the 2.5 race and finished 7th in 14:40. I, followed by Eli and Jackson finished first, third and fourth with times of 31:20, 31:27 and 32:12 respectively. Peter smashed his goal of 4o minutes by finishing in 39:17. Did you see our names in the paper? Right next to Ryan Hall.

Afterward we went to Sound Bites for the best breakfast in Boston. I introduced my friend Yesser and owner of the restaurant to the kids. When he realized that Jackson was also part Lebanese, he began talking in the native tongue to a wide eyed Jackson (You know that look he gets). Yesser brought us additional free food even though Jackson couldn't respond with a hello in Lebanese. (Marsha promises to teach him.) Eli stated that he was not very hungry, but proceeded to order this giant waffle covered in fresh fruit. Not only did he eat this thing larger than his head, the boys ate everything in sight. I had to protect my pancakes with the threat of bodily harm.

The sun broke out and we headed south on Route 93 to Quincy quarries for some rock climbing. The boys were overwhelmed by the number of cliffs and the artistic quality of the graffiti. We set up on what is known as the Oven Wall and did three climbs ranging in the 5.8 to 5.10 range. We spent about 5 hours having a wonderful time challenging ourselves on some pretty hard climbs. Eli and Isaac had the usual brother competition (Eli owns Isaac for life in the pull up competition) Jackson, you know how literal he is, scraped his knee on a climb called Blood Streak and left his blood all over the rock. We were some of the last climbers to leave, and as we returned to our car we made a mental note of the climbs we want to do in the future. We all agreed that the climbing makes us much stronger in our upper bodies and much more flexible (we call it vertical yoga). So practice your belaying skills and let one of us know if you would like to come along next time.

Off Belay - Andy MIlne
Posted by Jamie No comments: