The Dual County League championships was held today on the famed Franklin Park course in Boston.  CSU skiers had a good day.  Here is what I could glean from the results.  Photo (from Bob Burnham) is of Isaac Hoenig picking up his award for 14th place in the Varsity boys race. 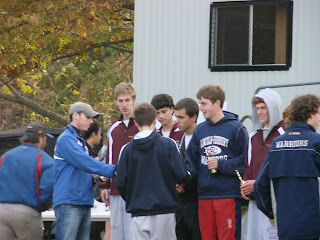 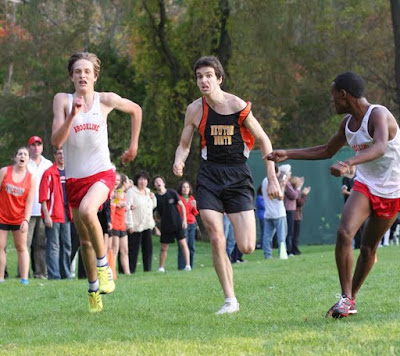 I stole this photo from John Waldron's Newton North blog.  Great photo of Michael Goldenberg at the finish of the Brookline High vs Newton North dual meet, which Brookline won.  Michael has been running very well this fall on a very strong Newton North team, running 16:40 for 5th place in this race.
Posted by Jamie No comments: 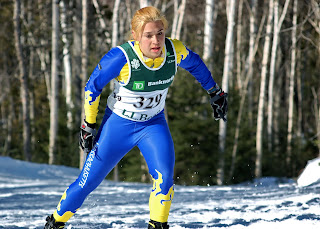 Editor's Note:  I shamelessly stole this post from the Stratton blog, removed the photo of Hilary in a Stratton suit and replaced it with her dressed more properly in a Mass team suit from EHS!

Hilary Rich, pictured above, sends a report about her freshman fall at Middlebury. Thanks Hilary!
Middlebury has been great so far! I’m taking an economics seminar, a computer science course and a West European politics class, so I am exploring some different interests here. The campus is beautiful, there are great views from just about anywhere you go, and the foliage was gorgeous. I’ve really been enjoying the roller skiing here, and the team is awesome. Andrew Gardner and Patty Ross (our coaches) have been amazing, and are really great at working on technique, and their strength plan is definitely making me sore…

AG and Patty have been keeping us going with a bunch of fun workouts. The other weekend we did some orienteering; my partner Doug and I were one of the first to go out, and by far the last to come in, but we have some good stories to tell! A couple days later, we traveled over to Keene to take a hike and visit with the McClelland family! We’ve had a couple uphill running time trials, which are not exactly my forte, but they have gone relatively well for me. We also had a double pole time trial, and tomorrow is our skate TT with UVM up at Jericho, followed by a classic TT up Brandon Gap on Sunday! Next weekend we’re planning on going to Hanover to run up Moosilauke, which is going to be a rough one, although I think I’ve come to terms with my lack of running skills.

Another fun thing we do is play speedball, which is the Middlebury Ski Team’s favorite game; I can’t say I’ve been contributing on the field a whole lot, but it’s fun to be out there. Overall, I am keeping busy between work, classes and training, but I am definitely loving it. I can’t wait for the season to begin and to be able to line up at the start!
Posted by Jamie No comments: 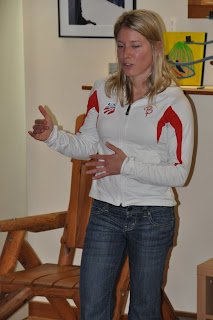 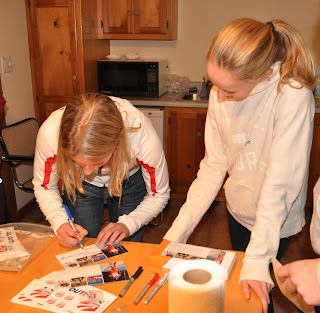 CSU was pleased to welcome USST member Morgan Smyth to our club for a visit.  She drove down from her mother's house in to tell us the story of her experiences as an elite skier, to answer our questions, and to inspire us to achieve our dreams.

She started by showing us a video montage of her training, racing, surgery, recovery, and some of the highlights of her illustrious career.  Then she took questions from assembled athletes, coaches, and parents.

Morgan told us that when she arrived at Northern Michigan University her coach Sten Fjeldheim told her that there are three big S's at college: Schoolwork, Social life, and Skiing.  She could pick any two to concentrate in, but not all three.  She focused on school and skiing for the fall and winter, and then when skiing eased off in the spring she could spend more time socializing.  Leading a balanced life means sacrificing some things.

She told us that her big focus in training is speed.  Her favorite workouts are speed training. She trains less hours than many elite skiers, but always is sure to get in all the quality training that she can.  Given that she was 7th in the sprint at World Juniors, 8th at the World U23 championships, and made the World Championships it seems her strategy has paid off.

She discussed her past surgery for a bad knee injury and her recent surgery for compartment syndrome.  She demonstrated her balanced approach to recovering from such serious setbacks and her exceptional mental toughness in staying positive throughout.

One good question was how she managed to do so well in international competition.  She explained that she felt her secret was that she was not scared of European and Scandinavian competitors.  They are just like her, doing the same training, skiing the same way, so why shouldn't she be just as fast?  What a refreshing attitude.

She told us that she has been dreaming of going to the Olympics since she was in grade school, and that the dream has been solidifying and becoming clearer ever since.

She finished with the dramatic tale of her recovery from knee surgery and her quest to win the NCAA championships.  Her dream was squashed by over-training and difficult waxing conditions.  She described the pain of listening to the announcer tell everyone she was in 23rd position as she skied by on her first lap.  After finishing she followed her mom's rule that you are allowed to mourn a bad race for 10 minutes and then you have to move on.  She went to the woods for a good cry and then came back to thank her coaches and teammates.  She had failed to reach that goal, but she realized it only felt so bad because she had been successful at almost every other goal.  So, her record of success was very close to 100%.  With her sunny attitude back in place she moved forward with her Olympic plans.  What amazing resilience.

With surgery in August she faces a big challenge making a comeback for this Olympiad.  The CSU athletes made a poster of positive messages while she signed cards for them and handed out pins.  No doubt that Morgan will be one of 's best athletes for some time to come.  We will be cheering for her this year.

Bonus Day on the Littleton Loop! 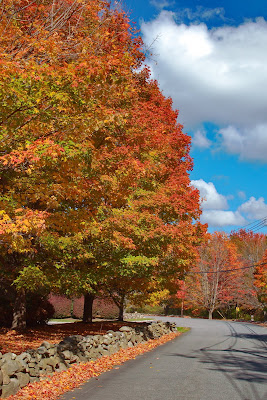 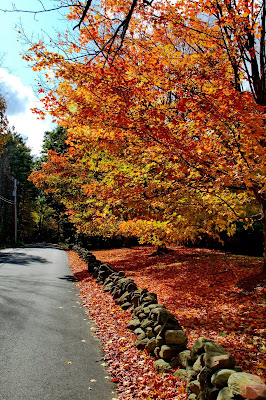 The weather was supposed to stink today, but it was gorgeous!  I ain't complaining.  Of course, I was too busy skiing to take pictures of anyone today, but did go back for this shot of foliage.  If you know where it is leave a comment below....there might even be a prize!
Posted by Jamie No comments: