Jrs. and Coaches on Snow at Craftsbury! 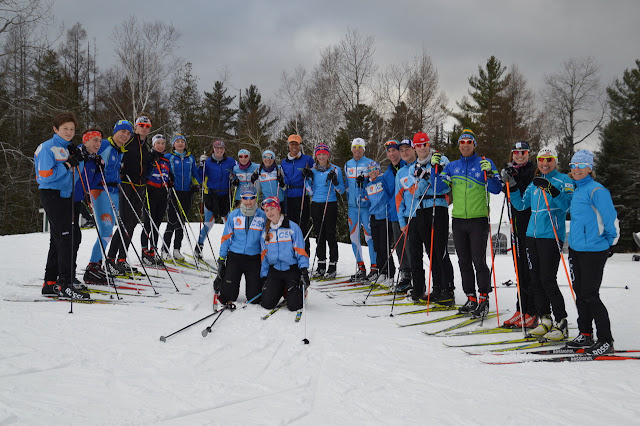 
We had a smaller turnout this year than in recent years, even though the weather for rollerskiing was pretty good with light winds, temps about 50F and mostly overcast skies but no rain, snow or other stuff falling.  Harvard brought a big contingent as usual, making it a fun race with several CSU Jr. grads including Clara Cousins, Izzy Cole, Will Rhatigan and Jacob Meyerson.

It's a bit hard to report on the race from the back of the pack, but suffice it to say, everyone shot off the line and headed up the hill way ahead of me.  There was a nice lead pack with Alex Burt doing the 1 lapper skiing with Mack, James (who did 2 laps) and Will, while behind them things got stretched out a bit.  Leading out on the women's side were Tegan and Hannah.  Further back, Robert and I were chasing Lily and at one point I made the pass but got re-passed at the bottom of the long downhill so it was back to chasing.  About this point Robert told me he was struggling and eased off a bit.  Back up front, Alex came across the line leading the pack and finishing first in the Jr. race closely followed by Mack and James, but Mack gapped James somewhere on lap 2 to take home the victory with James 17 sec. back.  I passed Kate Weinberg on the back half of the course with her speed reducer flopping around, so I hope that wasn't have a negative impact on her speed.  Kate hung in to take first for Jr. women.  At some point Andy came by on lap two.  His pole tip had failed on lap one and he'd pulled off to get his skate poles at the car before continuing on his way.  I was still chasing Lily, passed on the long downhill and then got re-passed again and that was it as she floated up the hills gaining time on me.  Up front Tegan must have put the hammer down on Hannah and came in first in the women's race with Hannah 20 sec. back.  In the Jr. race Henry and Linden were going at it with Henry coming out 1 sec. ahead at the finish.

So, it was a good day of racing.  I'd like to thank everyone who helped out by timing and watching the corners and keeping the traffic at bay.  Thanks to Chris City for the great photoset.