Long run and capture the flag

Our roving long run today was down at the Blue Hills, in Milton. It's a great park, big, with lots of hills, and, importantly, a pond to jump into after the run. 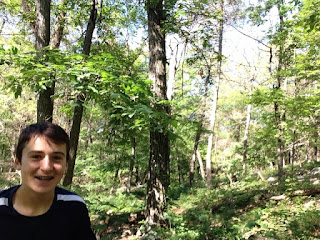 I suck at selfies. I had 12 skiers behind me, and I mostly took a picture of the trees, but at least Ben managed to sneak into the frame. 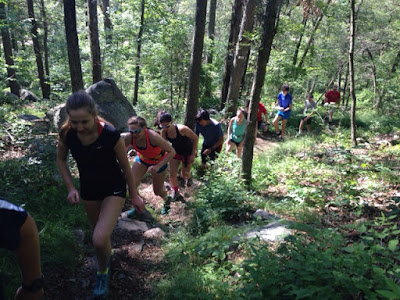 Had to stop and turn around to actually take this one. Our goal for the run was to go over every hill we could find. We found a lot of hills. 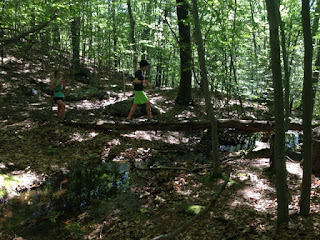 Milo demonstrating stream crossing technique. It wasn't a strictly necessary stream crossing, since we just crossed back over, but the tree had looked so inviting... 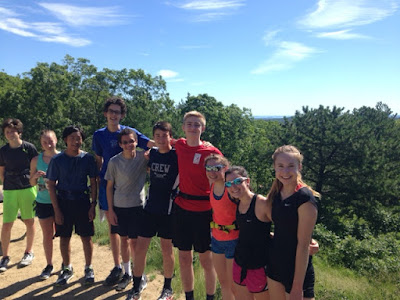 Top of Great Blue Hill. This one had an observatory on top. 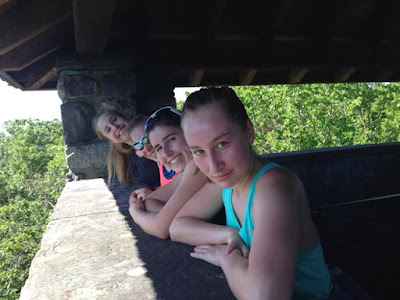 This hill had a fire tower on top. Those were the interesting ones. 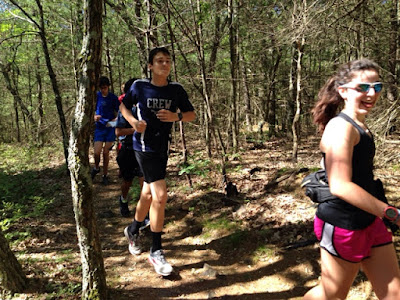 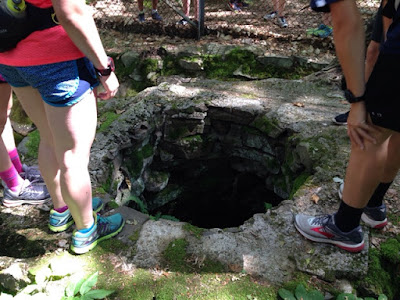 We found a well, that was fenced off, probably to prevent people like us from getting too close to the edge. 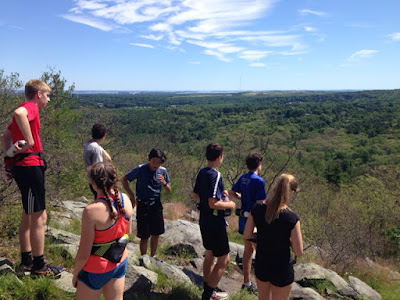 This hill had a view on top! 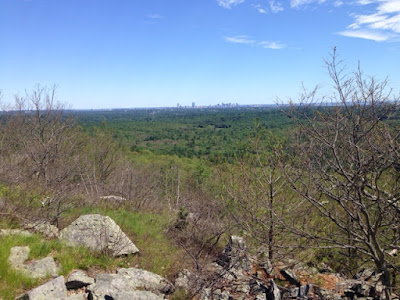 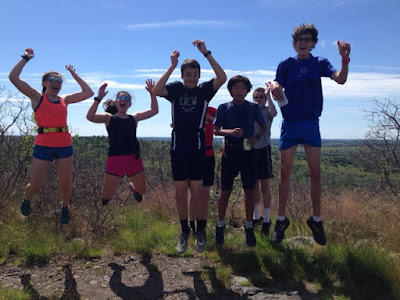 Then we did some plyometrics 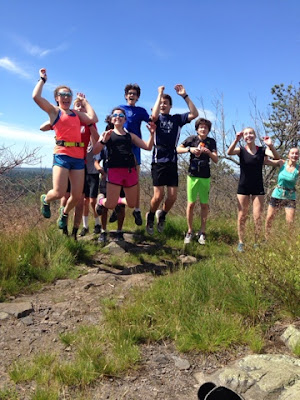 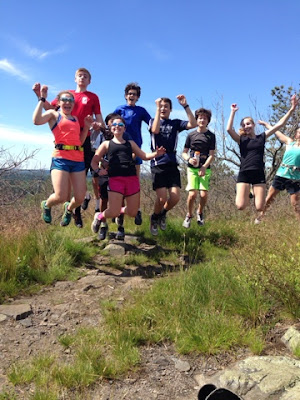 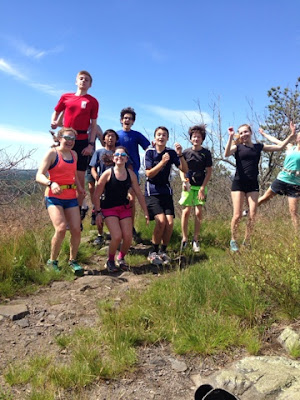 How is Kevin so tall?

No photos from the capture the flag game, but it was awesome. We cut the run a half hour short, and then walked deep into the woods, where I'd devised some orienteering capture the flag. Each team had three control flags, upon which hung the actual flags you were trying to steal. Each runner had an orienteering map, to help locate the flags. I'm pretty sure everybody had fun. Thanks to Dante, Tai, Kaden, Phillip, Sally, Isabel, and Nick's little brother whose name I can't remember, for joining us to make the game even awesomer! 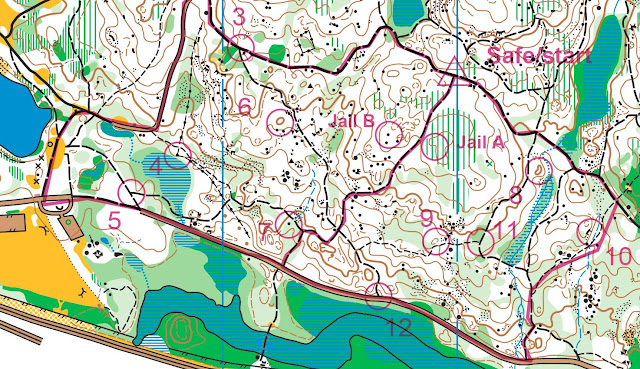 I may have been too ambitious about how much territory we needed. Next time, smaller. And there WILL be a next time!
Posted by Alex No comments:

This is the third year that I've decided to drag a bunch of skiers along to western Mass since I was going there anyway to run the Greylock half marathon. Each year, the trip has gotten better. This year, we had a ton of help from Shiela, Linden's mom, who organized all the food, lodging, and a bunch of other things. That made my job super simple. It was also helped by the fact that the group who came out there with me always took initiative, and we packed a lot of fun activities into the weekend, with no prompting from this coach. 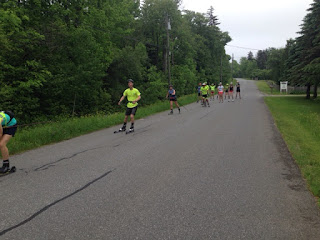 Started out with a rollerski! Joined by CSU alumns Rebecca and Sonya, who are skiing for Williams and helping to coach the Berkshire Nordic program over the summer. A lot of the kids on the EHS team ski for Berkshire Nordic, so this was a fun reunion for them all. But with so many kids getting excited to ski together, L1 sort of goes out the window... 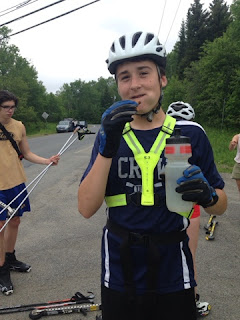 Shiela made chocolate chip cookies, and passed them out before we'd even gotten off of our skis! That's service. Above, Ben sees how much cookie fits in his mouth. 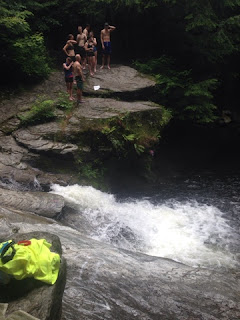 Post ski we headed down the hill for some cliff jumping. The water was high, which made the pool even deeper. Refreshing! 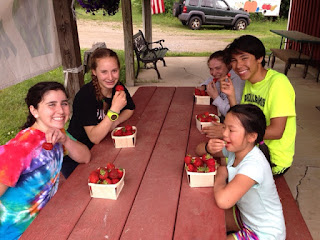 This time of year is the best, because it's strawberry season. Those strawberries were A.M.A.Z.I.N.G. Also, we discovered that Lee is a strawberry monster. 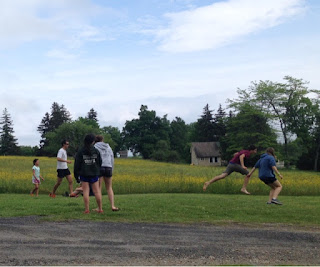 We stayed over at Notchview, which had just enough lawn for a pickup game of ultimate. Some ringers in this group! 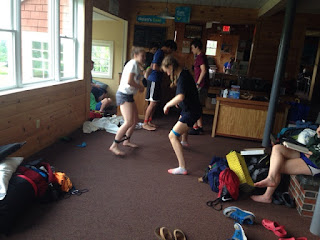 Then we did some yoga inside, and completely independently, the kids pulled out their bands and started doing hip strength. 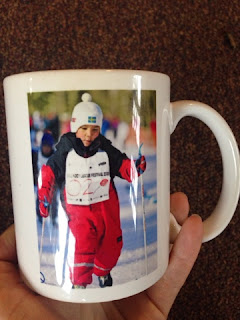 Look who I found featured on a mug at Notchview! Linden in his first BK festival. 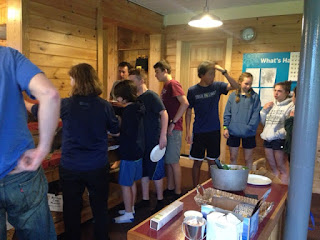 We ordered pizza for dinner. The Bucheits brought a salad, the Song-Weiss's brought lasagna, and Shiela brought the s'mores stuff. 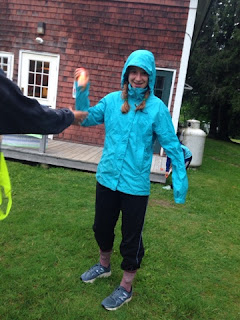 Sort of spur-of-the-moment, we determined after dinner that we had just enough time for a game of capture the flag, through the woods in the failing light. It was pretty perfect, and nobody managed to poke out an eye in the woods. 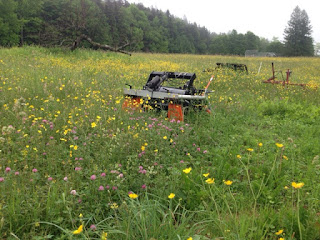 The wildflower field, where tracksetters go to die. 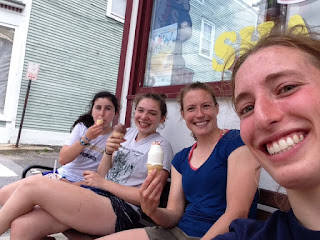 No pictures from the race morning, but most of the kids ran the 5k, and Sonya and I ran the 13.5mi (with a mountain in the middle). The deal is that if you beat me, I buy your ice cream, and Sonya crushed it, winning the whole race! In the short race, Tod was 2nd overall, and Ben was 3rd overall, winning his age class! Eva won the women's race, followed by Phoebe, and Kate was third in her age group. Linden twisted his ankle, but still finished, narrowly holding off Phoebe, and Milo was 7th in his age group. We also had parents and siblings racing: Jane Anna, John, Bryca, Philip, Kaden, and Zach!
Results
Posted by Alex No comments:

Brian Telfer (dad of CSUer Kevin Telfer) passed along the following report and photos from last Sunday's Tour de South Lincoln and Weston. Looks like everyone had a lot of fun on a challenging course!

For Sunday's long run, the Tour de South Lincoln and Weston, we had about 11 people, including parents. Most ran the full 11 miles, a few ran 7 miles, and a middle-schooler ran 3 or 4. The athletes in front were quite good with the map. That group came close to following the entire route perfectly, but did have one wrong turn that led to a bonus 0.5 mile for them.

Afterward, most of us hung out at the Telfer house for bagels and watermelon and drinks. We were impressed by how much the athletes ate! It was nice to have some gemütlichkeit (what's the Danish word that Rob uses for that?).

Everyone enjoyed the roots and boggy bits and boardwalks and confusing trail junctions. Stay tuned for a repeat later in the summer!

Here are some photos: 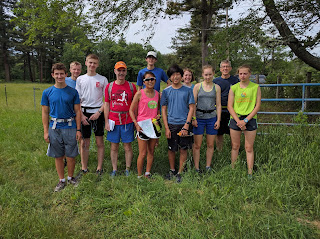 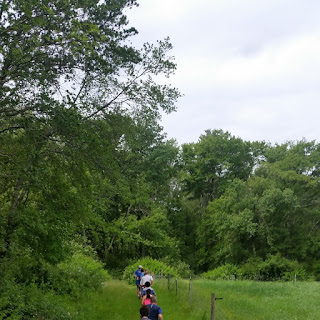 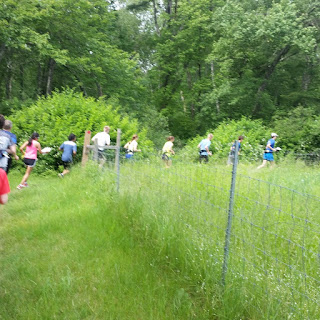 Posted by Brian Burt No comments:

A Perfect Sunday for the CSU Mt Wachusett Uphill Run - 2017

Around 25 CSU Juniors and parents had perfect weather for the 2017 CSU Mt. Wachusett Uphill run to the summit on June 4th.

James Kitch posted a CSU-record time of 14:20 to reach the summit first on a sunny Sunday morning, but all the runners looked strong in making this tough climb.

Here's a photo of the group returning from their warm-up run: 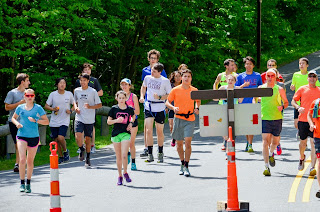 Further photos I took at the event can be found and downloaded here:

Most of the photos are of individuals as they neared the summit, so you can definitely see the all-out effort that everyone made to finish strong.

Congrats to all the runners who made it to the top, and thanks to all the parents who helped out with logistics and timing.

Posted by Brian Burt No comments: