Must Be Late Summer

With people off on vacation and some of the juniors off at Stratton Camp it was a small group of masters and juniors at Littleton this morning.  I stopped by for a visit, jealous that I couldn't roll on such a beautiful morning. 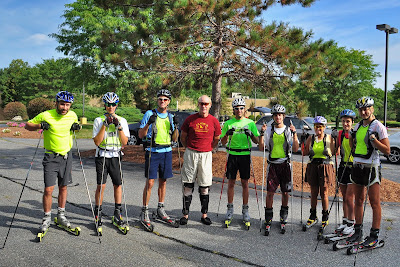 Below are some pictures of CSUers from Stratton Camp that I swiped without permission off the SMS blog (thanks Sverre!  There are lots more photos at: http://smsxc.blogspot.com/ ) Looks like a huge group, beautiful weather and a fun time!  How great that Andy Newall could be there! 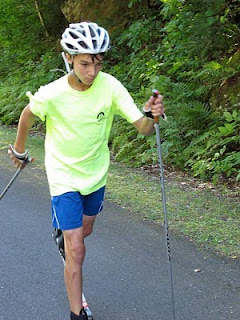 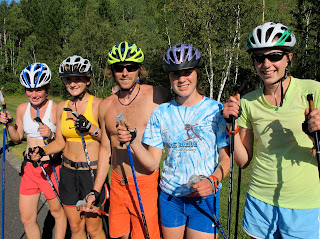 Hannah and Friends with Andy Newall 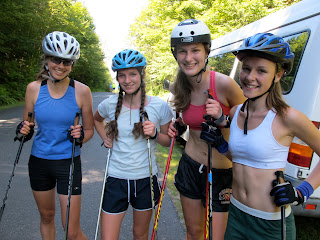 Rebecca and Julia and Friends
Posted by Jamie No comments:

The coach lost her camera somewhere, which means there aren't any photos from strength practice. And what is there to say about specific strength without photos, other than THE GIRLS ROCKED IT!! Julia, Charlotte, Katie, and Zoe showed up, and they were all pushing each other, especially on the starts. These girls are gonna be a force to be reckoned with this winter!

Since I didn't have a camera, I drew my best impression of the last repeat up the hill doing single stick, with Katie driving the pace:

My Vacation - The Good Part!

So, by now you all know that I'm out of commission for a good long while while I recuperate.  However, I did have several excellent days of hiking in the White Mtns. before my accident and just wanted to show a few photos of the good stuff that happened last week. 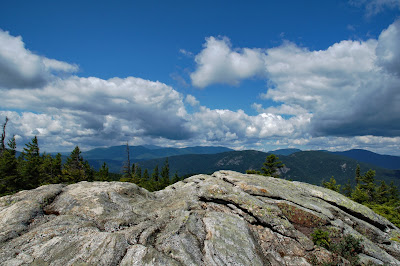 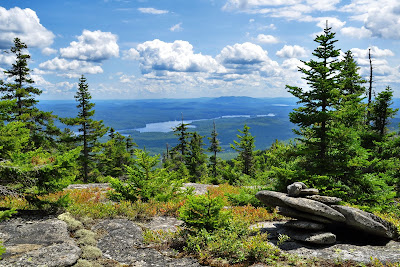 Kezar Lake from backside of Speckled 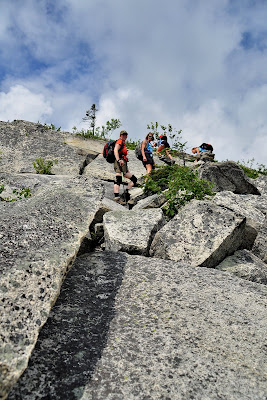 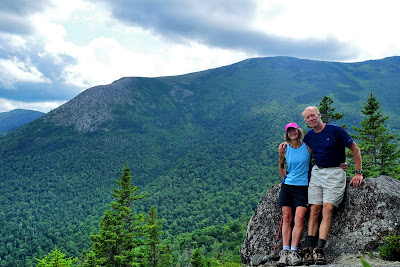 Lisa and I coming down Bicknell Ridge, Baldface Mt, with the Ledges in the background
Posted by Jamie No comments:

At ski camp, I set up a scavenger hunt after dinner one night. I decided to do that again, only this time, make it a little bigger. Basically, that just turned into an orienteering event, because I decided that the focus should be on running for a couple hours, rather than sitting around answering puzzles. So I drew very small clues or just pictures or words on pieces of orange surveyor's tape, hung those as controls, and sent out some unsuspecting CSU juniors to test their wits against a map. The results were interesting... Rebecca and Charlotte (let it be noted that Charlotte is one of the few people there who actually knows that park fairly well) managed to take two hours for the first 3km course. That is actually an impressive amount of lostness.

The way it worked as that there were four different courses. You had to go in order, and technically you weren't allowed to answer clues for the other courses until you finished the course you were on and picked up the next map. But I decided to let that rule bend, since I wasn't too clear in the beginning about having rules, and if I hadn't let that rule bend, Chris and Max would have basically zero points.

I did a typical Alex-type lesson where I spent 5 minutes explaining some of the less-useful bits about using a map and a compass if you had one, then off they went, with a 2.5hr time limit to get as many of the clues as possible. At the hour mark I was starting to get a little worried that everyone was lost (we had seven teams of two), but in came Chris B. and Clara, quickly on to their next map and hopes of victory. They were followed by Sam and his dad John, who wanted to protest that I'd hung on of the streamers in the wrong spot, but showing them the different map saved my skin. Then it was a bit of a wait, and Hannah and Izzy came in, looking quite smiley. Isaac and Jimmy were basically tied with Karin and Sue after the first leg, then I waited a while for Chris and Max, and once teams were coming in from their second map, Rebecca and Charlotte showed up. At least everyone was smiling.

The four courses are shown below. Most people completed two of them, with a couple people getting bits and pieces of other courses just from running into them as they searched for the "real" control. A couple people went out to do part of the third course before the time was up, Isaac and Jimmy went on a cooldown jog instead. What sort of game spirit is that? Its PRO.

Protests or complaints may be written on the back of a $20 bill and sent to: Alex Jospe.

The prize for the winners was to cut into the giant watermelon we had for afterwards. We went through two watermelons no problem, it was that sort of day. A good day to spend out in the woods!
Posted by Alex No comments: