It was a wet morning, but at least the rain had stopped by the time we got rolling in Littleton.  Just a couple photos:

A few photos from today's practice for the fall sports gang.  A big group banging out some specific strength intervals at Annursnac on another beautiful September day!

Links to Climb to the Castle Videos

Below are links to the videos John LaChance shot at the Climb to the Castle last weekend.  Enjoy!

On the drive over to the Climb to the Castle rollerski race Sean was disappointed to see the sun glinting through the thinning clouds.  He had hoped for epic battle through wind and rain up the 5 miles of roadway that climbs 2500 feet to the summit of Whiteface Mountain.  Be careful what you wish for.  That was the last we saw of the sun as the drizzle started back up and the wind was blowing with temps in the low 50s.  We would have an epic race after all.

Sean, Trevor, Rebecca S., Lewis, Max had driven with me and John LaChance to Lake Placid on Friday night after a day with temps in mid 80s.  It was hard to believe it would be so cold and windy.  Julia K. was already in LP at the NEG training camp.  She spent Friday doing speed drills with the USST women, Green Team, and SMS Elite Team.

The women started at 8 AM sharp.  The men were starting 10 minutes later.  Just after the women headed off, Max and Lewis came back from their warm-up battered and bleeding.  They had gone too fast down the hill in the warm-up area, missed the turn, and crashed hard.  Sometimes life gives a chance to practice resiliency beyond just making it through a hard race.  There was no time to bandage Max’s bloody elbow.  Perhaps the crash gave them both a good shot of adrenaline as both had excellent races.  Max broke 50 minutes take over 10% off last year’s time, take 3rd for J1s. Lewis was top J2 (prize age category was J1 & J2 combined).  Julia was a little slower than last year thanks to a recent illness, but still took 3rd in the J1/J2 age group.  Sean had a very solid race right in with the other J1s.  Rebecca couldn’t quite beat last year’s time thanks to excessive studying for AP Bio.  Trevor was doing his first race outside of Weston and acquitted himself well given that this event is 4 or 5 times longer and harder than a Weston race.  I started the race with my speed reducers on (what is wrong with me?) so I was in dead last after 100 meters.  Once I released my speed reducers I was able to catch a few skiers.  Best of all was catching USST women’s coach Matt Whitcomb with a mile to go.  I mentioned to him that I’ll be a grandfather next March.  Just sayin’.

The field of finishers was the highest quality that  you will see outside of a SuperTour or Nationals.  It was fun to hang out in the toasty warm summit building waiting for the awards and rub elbows with World Cup racers.

After the race we headed to The Breakfast Club for one of the best tasting meals ever.  We spent a pleasant afternoon at the LP library overlooking Mirror Lake.  Sunday morning we climbed Hurricane Mountain to enjoy of the best views in the Northeast on a perfect fall day.
In just 3 months we’ll be racing on snow! 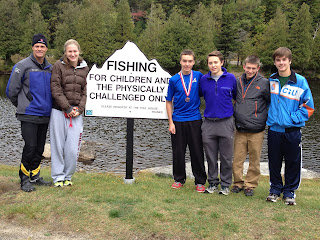 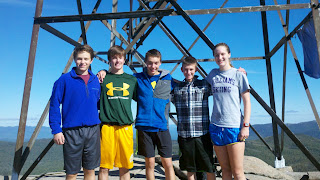 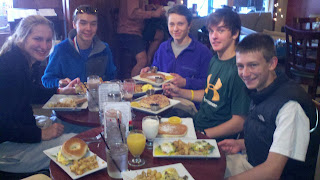 Bounding and Core at Prospect

Last evening was the first bounding workout of the fall at Prospect.  While it was warm and tropical, it rained....of course.  What is bounding without rain?  After, the team did a core workout.  Sometimes you get lucky and rather than doing core in the soaking wet grass, we got to use a temporary stage with a tent over it left over from the weekend! 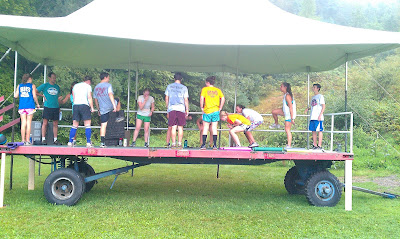 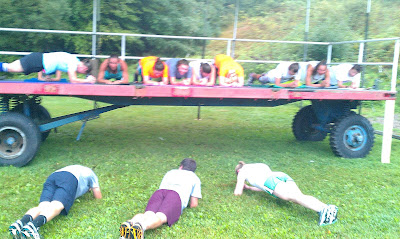 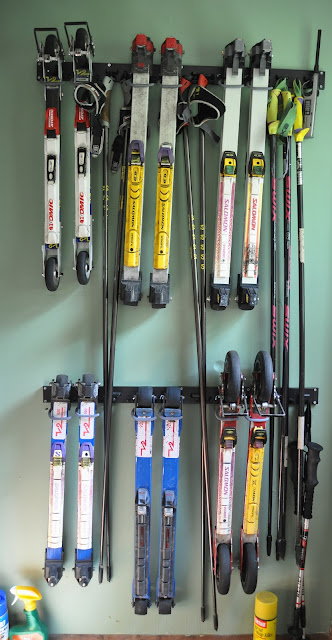 Wow, it's September already! But it still felt like summer for today's Littleton roll, sunny and a bit humid.  We had a surprisingly big group with a few college skiiers (Olga, Chris and Corey) joining us one last time before school starts. Being short of coaches, many thanks to parents who stepped in to accompany some of the kids.

Photo of post-ski snacking, stretching and yakking with the new iPad!. 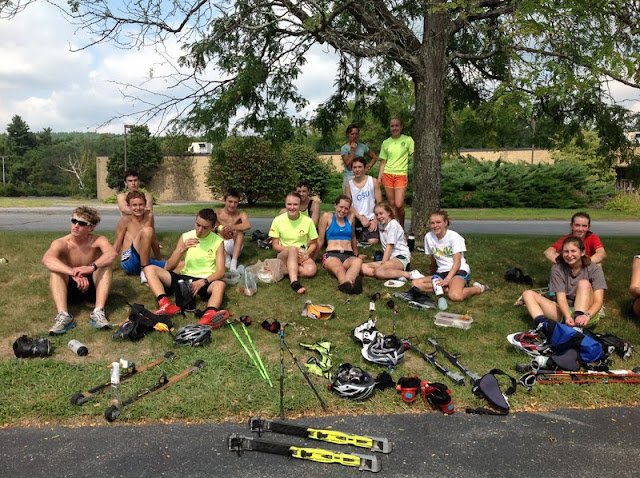