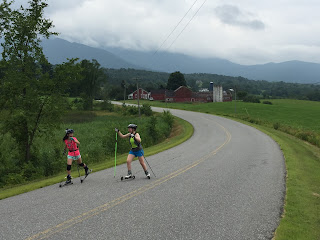 A small crew tried the VT hills for training this weekend.  Saturday featured a beautiful roller ski in the Pleasant Valley area that had the combined nice pavement, rolling hills and zip for traffic.  The Vt. country is quite charming, but it the backside of the Mansfield range had an ominous look as it was partially shrouded in the clouds.  Walker and Chris Bean joined Madeline, James, Carina, Chris Burnham and I for this new classic roll.  I had thought about going to the Jericho roller ski course, but this loop was much closer and really nice. 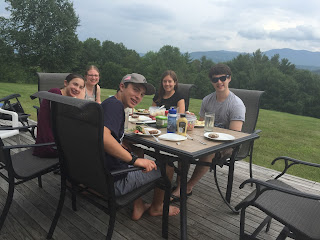 That afternoon we braved the sunny 85 degree weather and went boating on the Waterbury Reservoir for a casual paddle.  Lots of splashing between the boats with little regard for the coaches as Madeline and James worked on their quick strength by seeing who could dump the most water into the opposing ship.  A short swim and we returned home to cookout.

Sunday the same crew braved a 5 minute shower to climb up Mt. Mansfield in the early morning. 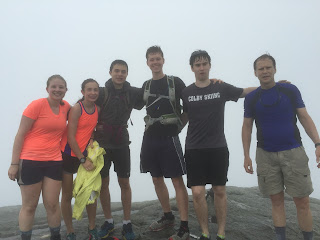 Kind of a hammerfest.  Once on the Chin we started booking it across the ridge to the nose where there is a hut as a unexpected drizzle and distant rumble got our nerves moving although the storms were not expected, but it was fortunately was a small cloudy drizzle that lifted over time.  That was enough to have Chris Bean drag the team into the depths of Mordor.  The cliff trail is a lateral trail 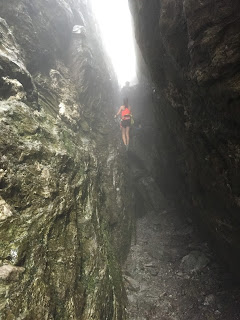 from the nose back to the Gondola summit that goes under over around and through the cliffs.  Two tunnels and an epic climb up the misty “Canyon of the winds” was one highlight (see photo).  The canyon is a crack in the rock that is about 300 feet across with walls about 200 feet high on the cliff and a 40 foot opposing wall that is only a few feet wide.   There is a new Stowe zip line that consists of 3 zips from the top to the bottom where speeds can exceed 80 MPH, but the high cost kept the hikers quietly eating their sandwiches while we watched some zipper roll into the fog at high speeds and huge heights.    We finished with another cookout only to find that while I was quite tired, the CSU juniors were still full of energy.

Rob forwarded a few photos from today's Wapack run/hike on a beautiful day:

Well, clearly Amie's group is having a lot of fun at the annual CSU Summer Ski Camp out at the Winchendon School.  Can the other groups measure up?  We'll see:

NENSA Club of the Year Celebration

Thanks to the Yoders for hosting a very nice cookout to celebrate the naming of CSU as the NENSA Club of the Year.  It was a perfect evening with Doug manning the grill and no mosquitos! 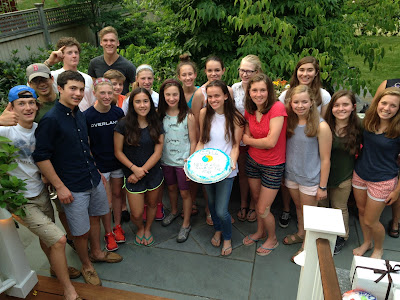 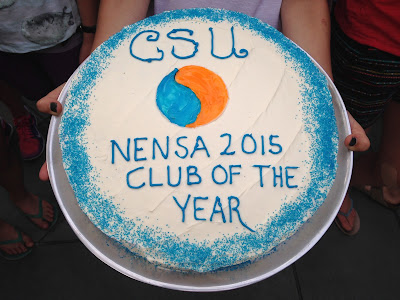