A handful of intrepid CSU athletes and coaches (possibly more coaches than athletes, but who is counting?) made the trip to Western Massachusetts for our first adventure weekend of the summer. Since there was a bike race using our usual rollerski route, we gathered at Jiminy Peak to meet up with some of our friends on the Greylock and Mohawk teams, that we know through EHS and U16s on Team Massachusetts. Our roll took us through some lovely countryside on rolling roads, into NY state, and past an intriguing tag sale. We had a moment of excitement when there was a rollerskier-bike collision, but luckily everybody was ok, with the exception of Owen's bicycle, which has now been shortened. 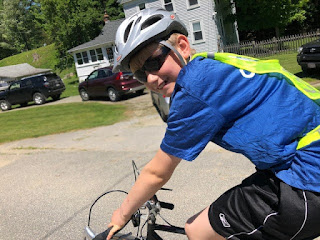 Owen before the bike was shortened 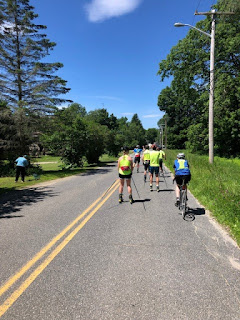 We had a nice crew, with David, Linden, and Alex from CSU, and Jakin, Corbin, Corban, Erika, Adam, and Justin from Berkshire Nordic, plus three younger kids who skied with their coach Jacob. Beautiful weather and beautiful roads!

After the roll, we headed to Williamstown, first for a *very* cold dip in Hemlock Brook, and then for some ice cream. Victor didn't seem phased by the cold water, so clearly they grow them tougher in Russia. After relaxing over the ice cream, we strolled up Pine Cobble, for the view, and then ate dinner at the slowest mexican restaurant I've ever been to. Good thing nobody was hungry. 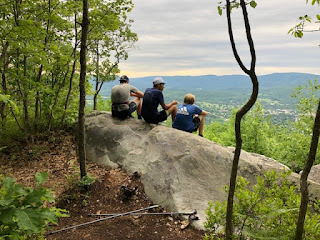 CSU past, present, and future 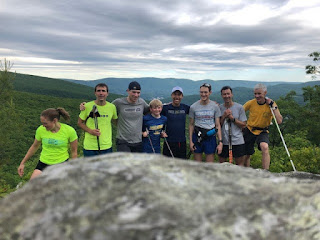 The group who made it up Pine Cobble. David and Natalie joined us for the hike on Sunday, but not the hike Saturday.

Owen did the 5k race, and ended up in third overall! The guys that beat him were both 14, and he's 11 (turning 12 on Monday, happy birthday Owen!), so that was pretty impressive. In the longer race, Alex B, Heiner, Ari, and Alex all braved a very wet and very hilly mix of Type I and Type II fun. There were no tears, and a good time was had by all. Jacob (Berkshire coach) won the overall race, and Alex J won the women's race, with Jakin taking the junior title, and Heiner winning his age class as well. We ended up skipping the ice cream in Adams, because we were all too cold and wet, but Ari and Alex J managed to find ice cream in NoHo, because you can't have a mountain race if you don't follow it with ice cream.

The next adventure weekend will be August 2-3, in Vermont. Don't miss it!
Posted by Alex No comments:

Perhaps someone will write up their Mt. Washington experience for the blog, but here are a few photos.  I missed people because almost no one was in CSU colors, so I apologize for that.  It was a very blustery day on top, but not nearly as dire as the predictions.  Lots of good results with both Gabby and Erik Vandendreis 1st in their age groups, Hannah and Madeline 2nd and 3rd in theirs,  Eliszabeth Anderson 3rd in hers, Tyler 3rd in his, Donna 4th behind CSUers Suzy West in 1st and Jackie Shakar 3rd in the women's 55 - 59 for a dominating CSU finish, Lisa 2nd in 60-64, Mary Lou Lowrie 4th and Jody Newton 6th in 65-69, and Fred Ross 1st in 70-74.  The women were 3rd open team, 2nd masters team, 1st seniors and 2nd veterans! 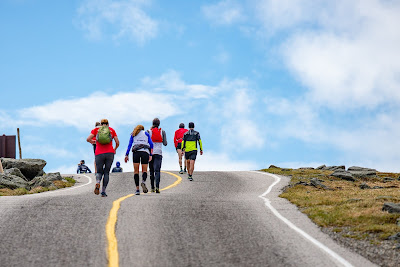