Lot's of snow, but even more footprints up to the Notch.  Good skiing on the north side for classic skiing.  Stuart,. Henry, Alex, Chris and Jim.  Note Chris circa 1990 short alpine boards.  Rehab skate.
Mansfield Nordic had a rather large practice group doing repeats on the pass.  Snow is here. 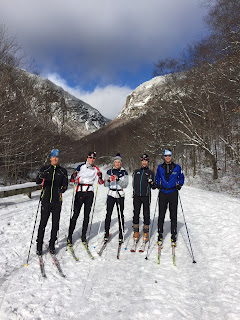 Wow, its hard to believe I've been putting on this race for 30 years!  Well, I might believe it based on my inexorable slide to the back of the pack from one year to the next.  That said, we had a beautiful, if somewhat windy, day for a rollerski race sandwiched in between an awful lot of rain.  I'll take it!  With the rain I had to paint the arrows and sweep corners the morning of the race, but it was worth it as a good group of Harvard skiers, CSU Jrs. and CSU masters showed up to duke it out and figure out what kind of shape they are really in on the cusp of ski season.  And after hearing about the lousy conditions up at the Trapps race on Saturday I was especially happy with the weather.

As I said, I was pretty much in the back the whole race so I didn't see much as everyone drifted away from me up Johnson St. on lap 1.  Alas, my 3 year duel with Robert Faltus and Clara Cousens ended and it was lonely.  But up front, Everett Sapp from Harvard took the victory in the men's race with CSU alum James Kitch in 2nd and CSUers Alex Burt, Linden Niedeck, Henry Johnstone and Ben Bucheit following in quick succession.  On the women's side Harvard's Ursula Volz grabbed the win with CSU alums Clara Cousens and Izzy Cole in 2nd and 3rd.  Andy Milne, even with a crash caused by a stone, was the first masters skier.  Laura Appleby and Sofia Scirica did the one-lapper taking 1st and 2nd, while Barry Kitch took the one-lapper on the men's side followed in 2nd by Noah Baumann and his dad Heiner in 3rd.  And, we were all cheered on by the Harvard skiers who had raced on Saturday at Trapps as they skied around the course!

All those who were at the awards took home a prize (pies, cider donuts, gift cards or blinkies from Chris Li).  I'd like to thank the volunteers who stepped up to watch the corners and do the timing and the Town of N. Andover for allowing me, once again, to hold the race despite the gas explosion crisis and digging up roads to replace gas lines.  Fortunately, the race course was outside the affected area.  Thanks again to everyone for coming up and making it a fun morning. 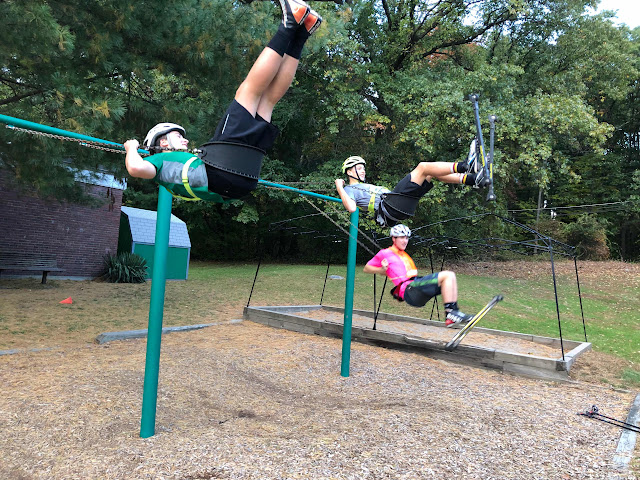 CSU getting into the swing of fall training.
Posted by Alex No comments: