We just wrapped up some exciting racing at the U16 Championships in Bethel, ME. This place was like a snowy wonderland, with beautiful sunshine on the first two days, mountain views, and a really nice Inn where somehow they let us inside despite not meeting any sort of dress code. CSU sent eight skiers and three coaches to the weekend of racing, and our skiers were an integral part of Team Massachusetts!

I'll highlight some race results, but before getting into that I'd be remiss if I didn't call out our unfortunate Sunday morning mistake, and give a HUGE shout-out to the way the affected athletes handled the situation. Team MA printed out schedules with the start time for the girls' race a half hour later than it was actually happening, and thus were caught completely sleeping when suddenly we heard the announcer talking about the first wave of skiers taking off. Everyone rushed down there, but it was too late for the first three skiers, all three of the CSU girls. The officials slotted them in as soon as was possible, but at the end of the day, the race officials decided not to use their actual time on course, but to apply a five minute penalty, because barring force majeure it is an athlete's responsibility to make it to the start on time. The MA Team has did everything possible within the rules to protest this decision, but unfortunately, it stood, and all three girls got a five-minute penalty.

Clara had the fastest time of the day on course, Francesca the 3rd fastest, and Mica the 4th. I don't care what the paper results say; that is DOMINANT.

I want to say that I am SO PROUD of the way that our athletes handled this situation. It would have been easy to get really flustered, but instead they remained focused, and channeled all their energy into the race, using the frustration as fuel. They reacted with maturity and poise, and it is actions like these that make us the team that we are. Sometimes, adults in positions of power make mistakes, and it totally ruins your day (or worse), and there is just no good lesson to take from it. What matters is that you take care of the factors within your control, and Clara, Francesca, and Mica did that beautifully. Respect.

The racing
Friday started with a 5k skate race, and in the boys' race, Lucas had a good battle with our friend Clint from DXC, skiing for NH, and ended up 13th, and the top Massachusetts skier. Sam was our sixth skier, in 39th, and Nick was our 11th skier, in 63rd! The girls went next, and Clara and Mica took first and second places - impressive! Francesca wasn't far behind, in 16th as our third Masachusetts skier.

Saturday started with a 5k classic. The boys went first, and Lucas again led the way, this time with a 4th place! Very impressive striding work. Across the board, our boys skied well in the classic race. Sam was our 6th skier again, in 33rd, followed by Nick and Noah, tied for 63rd place and our tenth MA skier. Milo showed off his great classic stride with an 88th place. The girls, well, the girls skied incredibly well, but the results do not reflect that.

Saturday afternoon we moved over to the golf course behind the Bethel Inn for a "sprint" race. I say sprint in quotes because it was a mighty long sprint course, and that is a tough one after having already done a morning race. The boys went first, and Nick deserves a shout-out for nearly cracking that top-50, in 51st place. The girls had a little bit of frustration to work out, and Clara won the race, with Mica in 12th and Francesca in 14th.

Finally it was time for my favorite race of the weekend, the relay! We did our usual fun times of getting together with the relay teams and trying to do a dry-run of how relays work, and then it was time to apply the glitter and get going. On the first leg, Francesca and Mica were scrambling, and had a little trouble off the start line. That didn't stop them from making up ground, and Francesca showed her mass start skills by moving up through the pack to tag off in 4th place. Lucas, Nick, and Milo were all on classic legs for their teams, and Lucas brought the first MA relay team into the exchange in 6th place to tag to Clara. Clara had a point to prove today, and did it decisively, moving from 6th to first in the space of a kilometer, before really laying down some hurt on the two final climbs of the course, tagging to Col McDermott for the last leg. Col did eventually get caught by VT, Midwest, and ME teams, but he hung on with a real fight, edging out Clint (DXC) by a toe at the line for 3rd place! (2nd official, because Midwest is a guest team). Sam and Noah were anchor legs for their respective relay teams, and had good battles as well, gutting it out up those last big hills. Sam outsprinted a team from VT for 12th place!

Great to see Francesca, Lucas, Clara, and Col on that podium!

But, there is a rainbow at the end of this story! Team MA submitted a protest to NENSA, protesting the race organizers' decision, and NENSA ruled that the missed starts were not the girls' fault. So, reinstated them with their original times! This means that now Clara, Francesca, and Mica are in 1st, 3rd, and 4th place in the classic, and tied for 1st, 4th, and 7th in the overall! (NENSA was not going to strip placements or medals from the athletes who had already been awarded the medals, hence the ties).

Lucas was the top MA boy, in 14th place, and Sam, Mr. consistency, was 37th. Nick was 55th, Noah 70th, and Milo 90th in the overall. I was so proud of all the CSU skiers on Team MA - they skied with integrity, dignity, resilience, and a whole lot of guts. 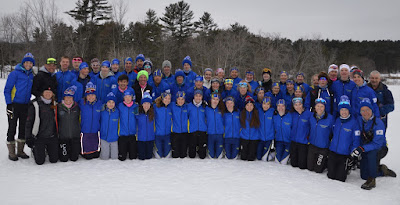 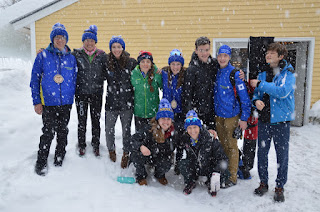 CSU contingent of the MA Team!

A huge thank you to Maddy for leading the coaching staff, to Maile for joining us, and to NENSA for hosting such a great event. I've attached a photo by Ann Kitch of the CSU contingent from U16s. Thanks CSU!
Posted by Alex No comments:

Weston Championships of the World

A few, mostly not so good, photos from last Tuesday's races: 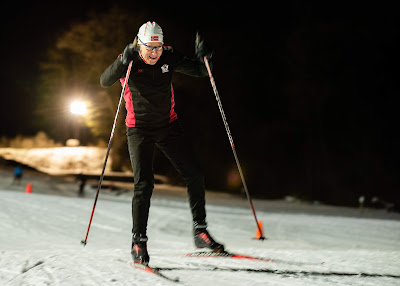 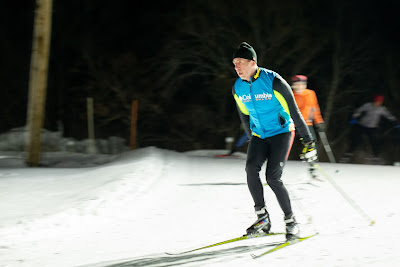 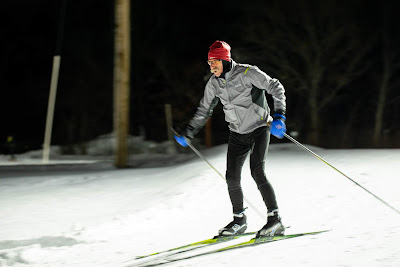 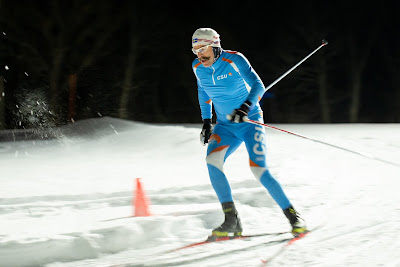 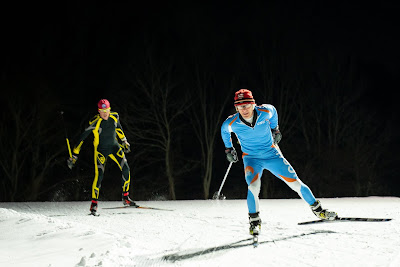 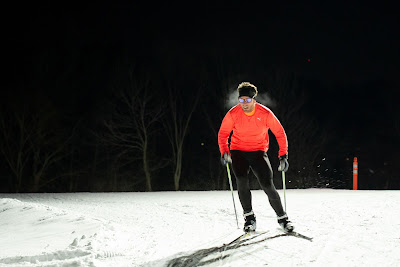 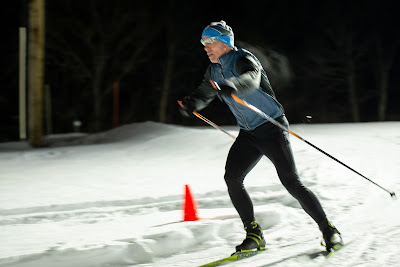 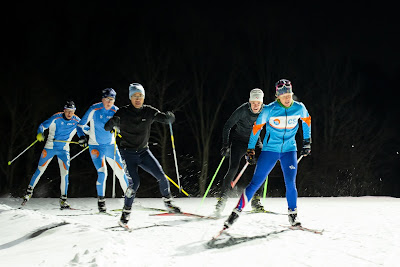 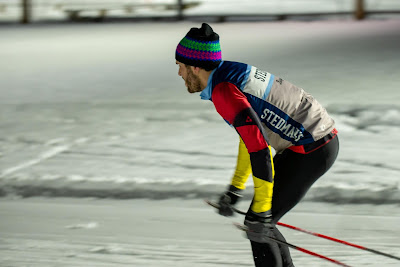 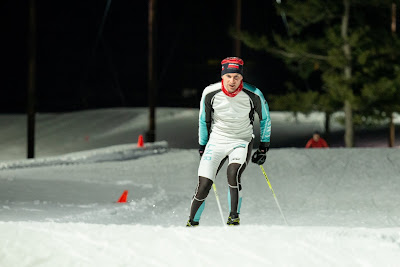 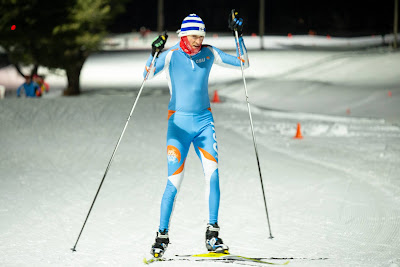 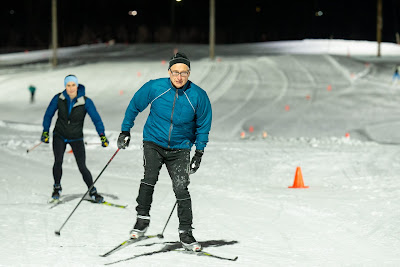 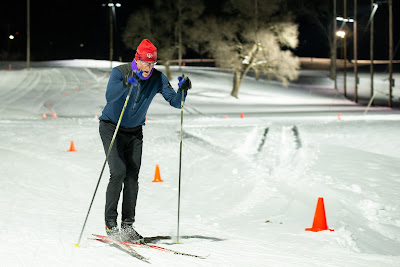 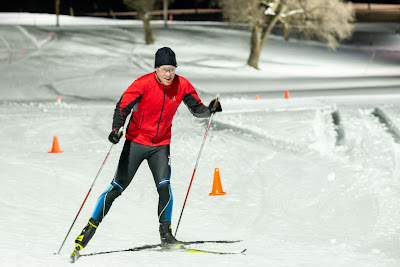 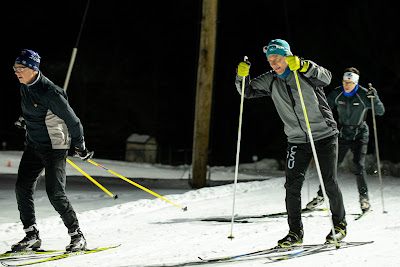 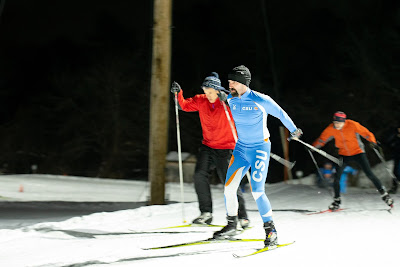 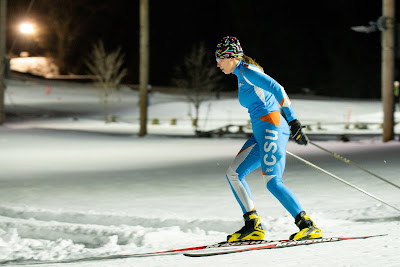 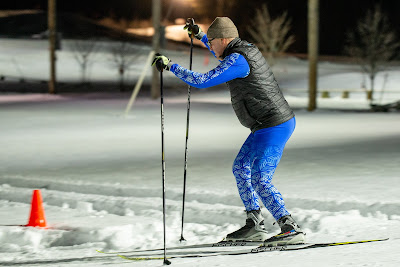 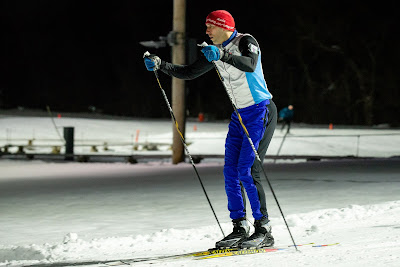 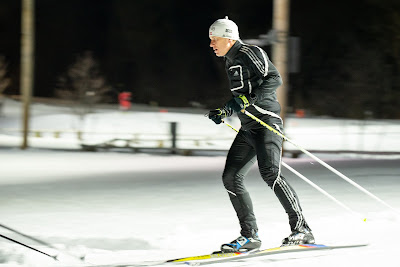 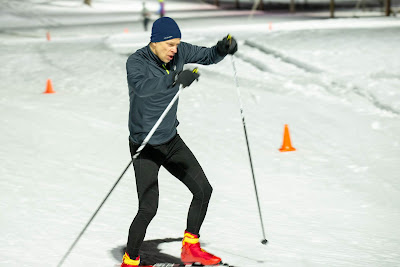 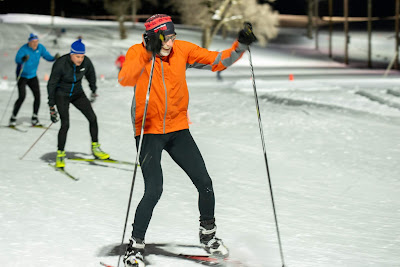 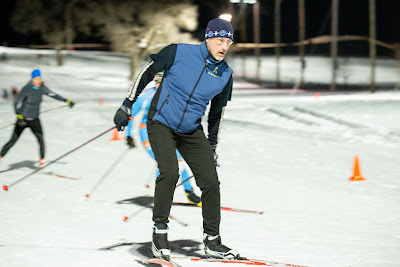 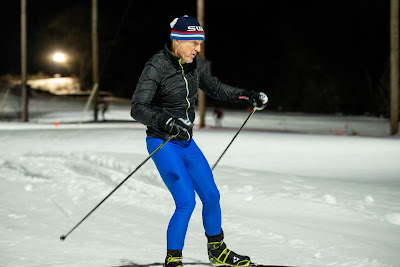 It would be great if someone had a story to add of their Bretton Woods Marathon adventure, but here are some photos of CSU and some CSU Jr. alumni in action.  The waxing was pretty straight-forward since it stayed cloudy throughout the race with occasional snow falling, obviating the need to switch skis (which is allowed).  The race, being at a later date this year, attracted lots of college kids, probably doubling the field for a much more competitive race than last year.  CSU was there in force.  Sorry if I missed anyone.