Yesterday afternoon the skiing was pretty awful in the mist and sleet with really squirrelly tracks that were very hard to ski in.  But, the real workout of the day was pushing a multitude of cars out of the unplowed parking lot.  Everyone got a good workout doing that.

This morning dawned a bit brighter with some sun poking through the clouds and freshly groomed trails.  However, once the CSU army started up Trail 33 we turned it into mashed potatos so it was a slog.  Up on race trail 22 the uphills were slow and the downhills a bit dicey.  I made a massive bathtub when my skis shot out from beneath me on the uphill after a fast downhill and Andrew Reed broke a ski when it apparently went into a moose hoof print.  Other than those misshaps it was a good 2 hour+ ski.  There is lots of snow here!  Things are firming up as more people get out on the trails, so this afternoon we will work on classic drills. 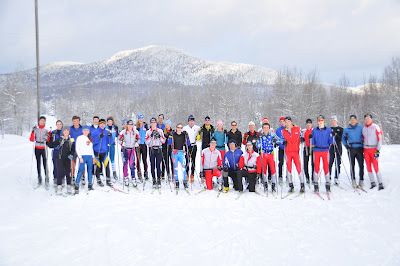 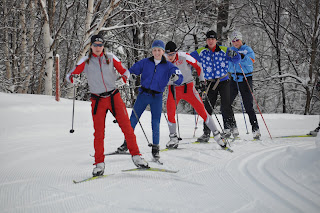 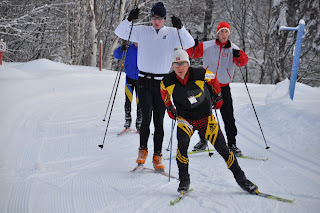 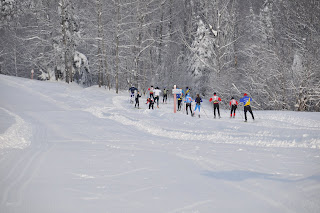 CSU has taken Mt. Ste. Anne by storm!  On the way up we stopped at Mt. Orford for an excellent classic ski in nice conditions.  There wasn't a whole lot of snow, but plenty for good tracks.  This broke up the trip nicely and we arrived at the condo early in the evening after stopping for dinner.  This morning we awoke to about 18" of new snow on the ground as about 30 skiers headed out there in a blizzard.  It has been snowing hard all day, although mixed with sleet from time to time.  So, classic it was for a beautiful ski in a winter wonderland.  I'll try to get some photos posted later.
Posted by Jamie No comments:

Sunday were the 5km/10km mass start classic races at Presque Isle.  The course conditions were a bit weird because the organizers decided not to regroom most of the course for fear of bringing up dirt and leaves since there really isn't that much snow there and there is no ice base at all.  So the only parts regroomed were those around the stadium area.

In the 5km J2 boys race Eli Hoenig and Jack Hegman had what was billed as "The Battle of the Day", skiing tips to tail for then entire race complete with a double pole duel down the finish straight.  Jack prevailed by 1.1 seconds over Eli.  Eli was followed home by Hamish McEwen in 4th, skiing another very strong race, while Rion O'Grady was 13th and Erik Brote 18th.  On the girls side, Corey Stock led pretty much start to finish prevailing over Heather Mooney by 30 seconds.  Rebecca Smith finished in 18th.

On the men's side Chris Stock also had a very good race, coming home 12th, followed by Isaac Hoenig in 29th, Jackson Rich in 54th, Neil Garrison in 66th, Rob Bradlee in 70th (1st Master), Chris Burnham in 83rd, Tommy Rummel in 86th, Jamie Doucett in 88th (3rd Master) and Nick Serbedzija in 91st.   Rob and I started in the massive master's only wave of 3 skiiers 3 minutes after all the college and high school kids, so we avoided massive pile-ups on the early downhills, which was good because I did a wonderful face plant anyway trying to figure out which of the many ruts to ski in and clearly making a bad choice.  With no base there was nothing to slide around the corners on, just lots of loose snow that went down to grass in some spots.  Other than that though, the skiing was great.

Prizes for all on the podium consisted of a bag of Maine potatos!
Posted by Jamie No comments: 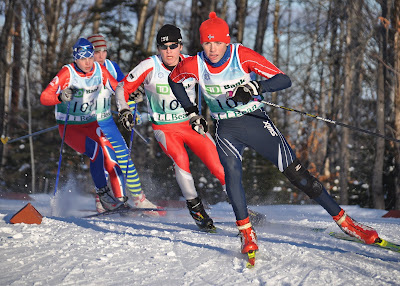 This weekend the CSU Jrs made the long haul up to Presque Isle, ME for the 1st big races of the 2009-2010 ski season.  Without much snow time under our collective belts it was going to be interesting to see how everyone faired in the far north.  We arrived Friday at about 3:15, just in time to move stuff into our wax room, change and get on our skis for a cold and windy shake down ski after the long ride up in the two 15 passenger vans that we rented.  The view of Katadin was breathtaking on the way up and I saw 3 bald eagles while I was driving!  We were crammed in pretty tight so everyone was glad to get out and stretch our legs and lungs and preview the sprint courses for Saturday's races.  With the sun hitting the horizon at 3:35, we mostly skied under the lights for about 30-40 min. trying to get the right line on the switchback corner at the bottom of the fast downhill.  Tomorrow's races would be interesting!

The qualifying round went off in the morning and CSU faired well with Alex Jospe and Chris Stock qualifying for the elimination rounds in the J1 and OJ age group, while  Corey Stock, Eli Hoenig and Hamish McEwen qualified in the J2 age group.  Both Alex and Chris were eliminated in the quarter-finals.  However, all three J2s advanced to the A final races.  Corey Stock took off in her final as the sun was heading down, but was dogged by a very persistent Heather Mooney, who managed to draft for the whole race and sneak by Corey on the finish straightaway.  In the boys A final Eli Hoenig jumped into second place at the start and finished a strong third, while Hamish McEwen, a first year J2, raced very well to take 4th place.

It was a very good day for CSU, especially considering that much of the competition has been on snow a lot of late.  Stratton has been on snow for 2 weeks at Mt. Ste. Anne, Burke has been out west, many groups got on good snow at Thanksgiving.  We got on 500 meters at Weston!!!

A few photos from the sprints. 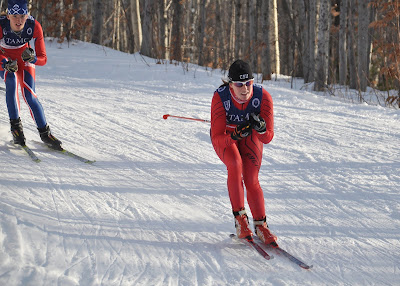 Alex in the Quarterfinals, smiling about her fast skis 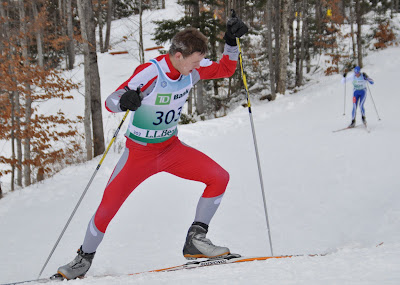 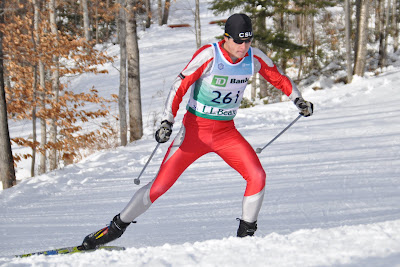 Nick and Isaac on the final climb to the stadium

At Weston today the kids did a skate sprint time trial as part of practicing the entire routine for warming up for a race.  The goal was for each skier to do a complete warmup just as one would do for a sprint race.  Here are the results:

12 CSU juniors and 4 coaches met at Windblown today under blue skies for a classic workout in the morning and a skate workout in the afternoon after a relaxing lunch period where most of the kids even pulled out their homework.    As you can see from the photos, the weather was very nice, although pretty windy.  Windblown is in very good shape given the amount of snow.  The classic was excellent as was the skating.  I even skated on race skis.  In the morning we toured all around and finished up with a number of no pole drills.  The afternoon skate consisted of a good warmup ski followed by skate drills in the field.  Lots of smiling faces!  It was, however, not wise to venture off the groomed trail given the crust, as Rion discovered. 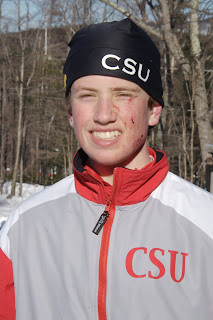 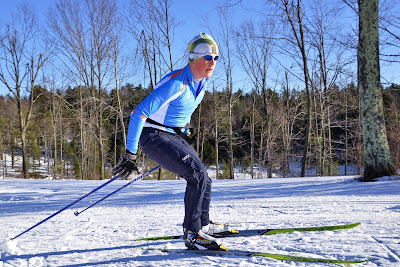 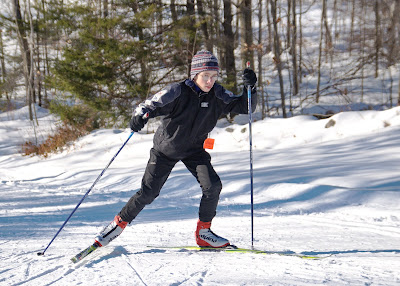 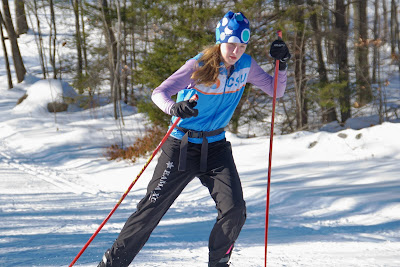 Ed Summersby Captured by the Herald!

Ed Summersby was captured by a Boston Herald photographer while rollerskiing on Huron Ave in Cambridge during the hot spell last week.  Hopefully we won't need to rollerski much longer! 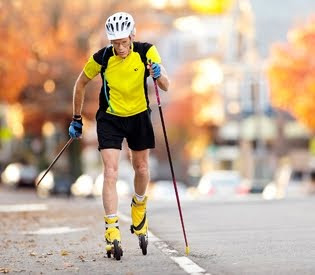