Run of the Charles

Today was a near perfect day on the Charles, except for the fact it was the lowest water I'd paddled in over about 17 years of doing this race.  The Quinobequin Canoe Club, together for this one race and now with mostly CSUers, put together another great race to bring home the gold for the 11th year in a row.  This year we drafted Jim Burnham and Eli Hoenig to provide some young talent given that the rest of us are pushing 60.  We put them on the legs with the most running.  We may be almost 60, but we aren't stupid!  Wes Denering and Gus took off in leg one and had a heck of a race trading paint, as they say in NASCAR, with the Snoopers, our perennial competition.  Sort of reminded me of a Weston Tuesday Night Championships of the World Race.  Even a few miles later the two boats were side by side and at the finish of the leg, which was won by Todd and Margo Webber.  On Leg 2 Eli Hoenig and Bob Burnham took over, chasing the Snoopers, who did not change paddlers.  Somewhere out there they hauled in all the relay boats who started ahead of us in the staggered start.  Eli then ran the boat over the first portage with Jim Burnham, who was paired with Bob Kelley for Leg 3.  Then Jim handed off to Andy Milne and Don Kelly and helped them run the boat through Newton Lower Falls on the longest portage.  Andy was the motor in the front of the boat through the Lakes Region and after 5 miles handed off to Jamie Doucett and Rob Bradlee for the final leg.  We didn't run so fast, but once we hit the water we got cranking.  The Charles was the lowest I've ever seen and I've done about 17 of these things.  Once we hit Watertown the head wind kicked up several notches and Rob and I had to actually do some work!   What's with that?  We chased down a couple more relay boats who had actually started before us, reeling in EPA's boat with a friend of mine paddling on the last big turn.  Rob kicked up the tempo and that was all she wrote.  11 years is a pretty good run! 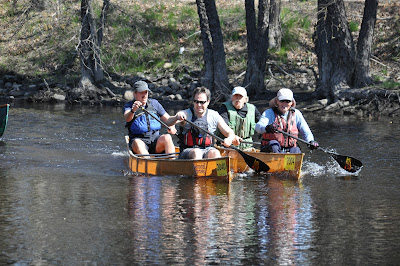 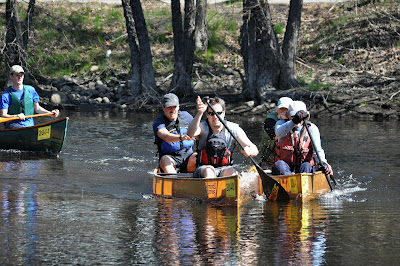 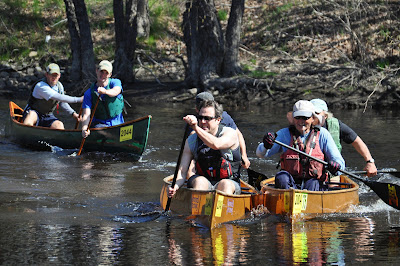 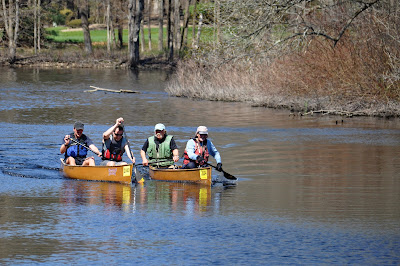 
On Tuesday I took my usual walk around Boston Common and the Public Garden at lunchtime.  I had to get out. I was numb from Monday's horrors.  It had been such a glorious day for a race when I met up with Rob, Anne and Jim Burnham and my daughter Sarah to watch in Newton and cheer on Lisa in her 25th Boston.  I had sampled some delicious Jampel ice cream, the crowds were out and the usual excitement and anticipation was in the air. It was cool, a perfect day to run. The top woman stormed past and later we were amazed that she had been run down by the eventual winner given her lead at 19 miles.  The usual pack of African runners flew past.  Which one would prevail on Boylston St?  Then CSUers started to came by: Terry McNatt, Lisa and others in the dizzying sea of runners flowing toward Boston.

I have a soft spot in my heart for this race.  Even though I only ran it 5 times and haven’t toed the line in Hopkinton since 1982, I’ve been out to watch nearly every year since.  I have suffered Heartbreak Hill and experienced elation just like everyone else who runs the Marathon.  And with 24 of these things under her belt, Lisa and I discuss the race often.  We always have CSU friends running so I come out to cheer.

In a moment so much changed, from the satisfaction that Lisa had run an excellent race to sudden panicked phone calls and great relief as I saw Lisa walk out of the subway, still wrapped in her foil blankets (she had a snafu with her bag at the finish) to numerous emails, texts and facebook posts as CSUers and family checked in that all were safe. In a moment of despair watching the news I wondered if anything would return to normal.  So many people had been so grieviously injured by this horrible act.  So many others had acted so quickly and selflessly to help those in need.  It was mind-numbing.

From the moment I walked out of North Station on Tuesday to walk to work the signs were everywhere that something bad had happened.  The guts had been pulled out of a compacting trash can next to the Tip O’Neil building so no one could use it for a bomb.  A state trooper cruiser blocked the entrance to the State House. The Common was almost empty when most mornings it is busy.  Later, walking out of work at lunchtime there were two cruisers parked outside the building, a helicopter hovered high above the city, the Common was full of police motorcycles lined up neatly, swat team personnel were gathered outside the entrance to Park St. Station, semi-automatic rifles at the ready.  I was overwhelmed by this feeling that someone had tried to steal our city and our race from us.  They had stolen 3 innocent lives. A great sadness hit me and tears welled up in my eyes. There was a command post set up at the bottom of the Common, barricades ran across Boylston St, a long line of news trucks and satellite dishes lined Arlington St., flags were at half-mast luffing in the springtime breeze, bomb-sniffing dogs were on patrol with their handlers and the Swan Boats, normally full of parents and noisy kids feeding the ducks as they lapped the lagoon, were tied up going nowhere.

And then I noticed something that gave me some hope and a smile.  People were out walking in the Common and more particularly, as with every other Tuesday after the Marathon, those who had run were out walking, visitors to Boston proudly wearing their yellow marathon jackets.  One man soaked up the sun and was proudly displayed his medal while he sat on a bench.  The yellow jackets were in fact everywhere.  These gimpy, sore runners were out to take in the city before returning home, most walking slowly, some limping from their blisters and cramped legs, many speaking some other language.  Most were visitors to Boston from across the country and around the world, proud of their accomplishment and showing their camaraderie as runners.  They were not afraid to walk the streets of Boston, even amid all the unusual security and signs everywhere that something was terribly wrong.  The runners had come out, to see the city, to wear their jackets, proudly letting everyone know they had run this race.  I was relieved.  It will take time and a lot of healing and Boston and the Marathon are forever changed, but the City and the Marathon and the runners will be back.
Posted by Jamie No comments:

It didn't feel much like April today at Windblown with temps right at freezing and strong winds, but it was fun skiing around on the dwindling snow, avoiding the brown spots, going off-piste.  The CSU stalwarts were there to lay claim to the 6 month ski season. Yessssss!