Jeff Dusek
Background:
I started skate skiing in January 2019 after being invited by the Wellesley College Nordic Ski Club to be a volunteer coach (aka drive buses to practice since I already coach/drive the sailing team). I had tried nordic a couple times in the past with the MIT Tri Club and enjoyed it, so I found some older used gear and decided to give it a go. I quickly found I enjoyed having a winter sport that kept me off the bike trainer, and actually improved a bit by the end of the season. I upgraded to some nicer boots after admitting mine were too big, and realized I needed to cut my poles down to a more appropriate size. Gotta love the learning curve of a new sport!


Heading into the 2019-2020 winter, I wanted to try racing for the first time through the Weston Tuesday night series, and decided to target the Craftsbury Marathon as my “A” race for mid-winter as soon as I realized it was a 33k on my 33rd birthday… too perfect not to!

My summer 2019 tri season was a bit of a disaster with a chronic hip adductor strain wreaking havoc on my biking and running. I did have a couple ok races later in the fall, and made the investment in roller skis in October to try and get a jump on the winter season (found a great deal from a shop going out of business). It took a bit to get comfortable on roller skis, and my boots have the scuff marks to prove it, but ultimately I think they helped me be ready for the first snow in early December. Once we had snow at Weston, I tried to ski 3-4 days per week, and as I gained fitness I focused on making one of those a long easy ski, and one intervals. I also joined the Tuesday night races, skiing near the front of the 2nd wave and having a great time learning pacing and some tactics. I considered dropping to the 16k at Craftsbury, or dropping the race altogether, several times in December and January as my hip continued to give me issues. My outlook improved after a key 2-hour 30k+ workout on January 11th (in 60+ degrees…) which gave me some confidence I could at least make it through the race if I paced well and fueled correctly.


I made one trip to Windblown in NH in December, my second time skiing away from Weston, to spend some time with real hills and descents. I also learned how to wax my skis, and built a waxing form for our paint booth at Olin College (faculty life has perks), which makes it much nicer to keep my gear in good shape. I kept swimming and cycling through most of December and January, but did a ski-focused block for the couple weeks leading up to race day. 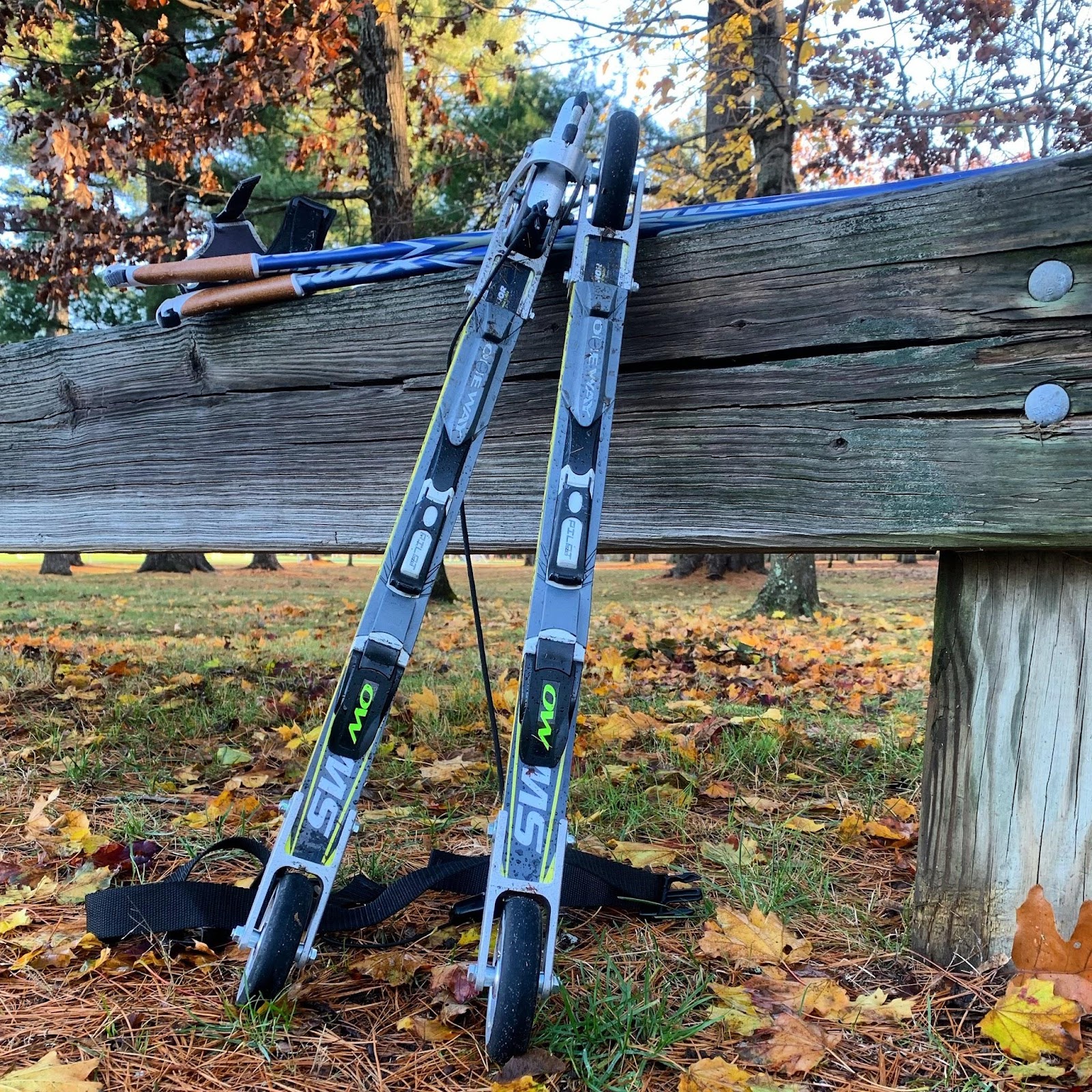 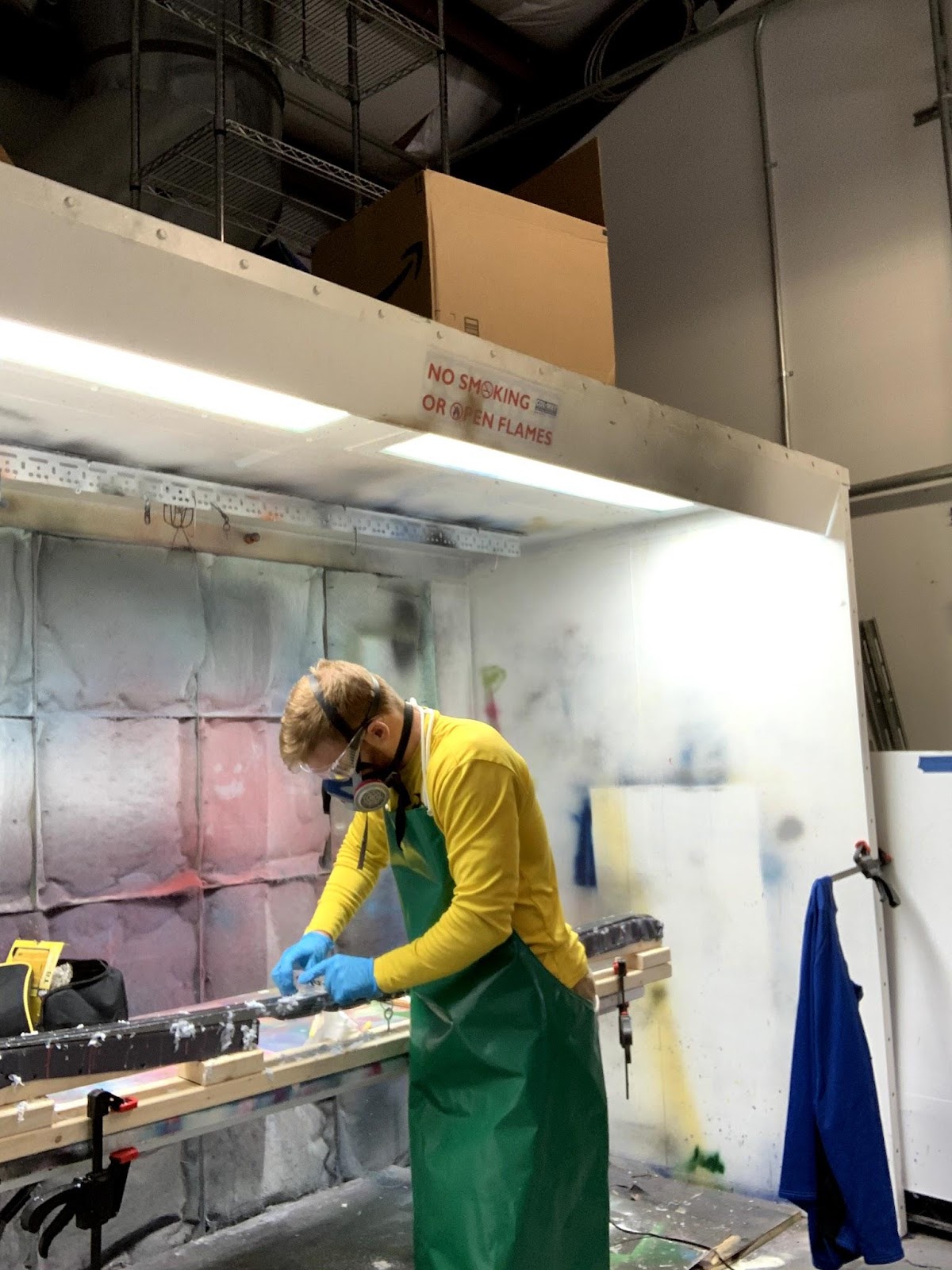 Coming into Craftsbury weekend I had been battling annoying top-of-foot pain and some discomfort in my left sesamoids, unfortunately these are common occurrences for me across all sports. I decided to race Tuesday, ski easy Wednesday, and then take Thursday and Friday off to rest and ice the foot. The couple days off allowed me to get my skis ready, following the Toko recommendation of two layers of NF blue followed by one layer of NF red (Craftsbury is a no-fluoro race, which I strongly support). I drove up to Craftsbury on Saturday morning with the goal of getting in a short shakeout ski on the course after the classic marathon finished since I had never skied at the Outdoor Center. Conditions were fantastic, and my legs started to come around after some initial bad feelings from the rest days and the long drive. I re-waxed the red layer after skiing Saturday, and was pretty happy with how the skis were running. My wife, Lianne, had a teaching retreat on Friday and Saturday, but drove up Saturday night to cheer me on. We had a great dinner at the Blackbird Bistro (recommended), which was conveniently in the same building as our AirBnb. 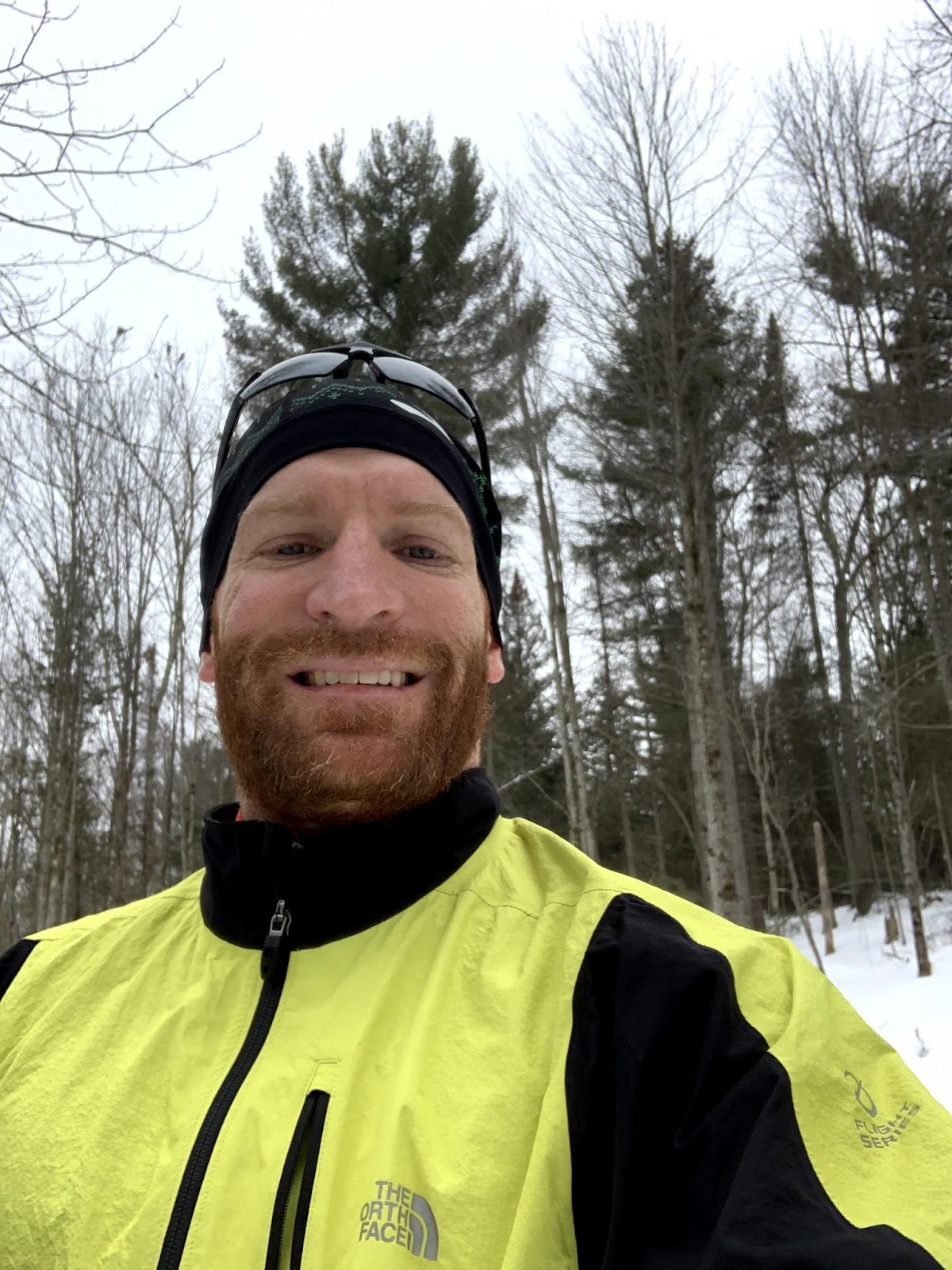 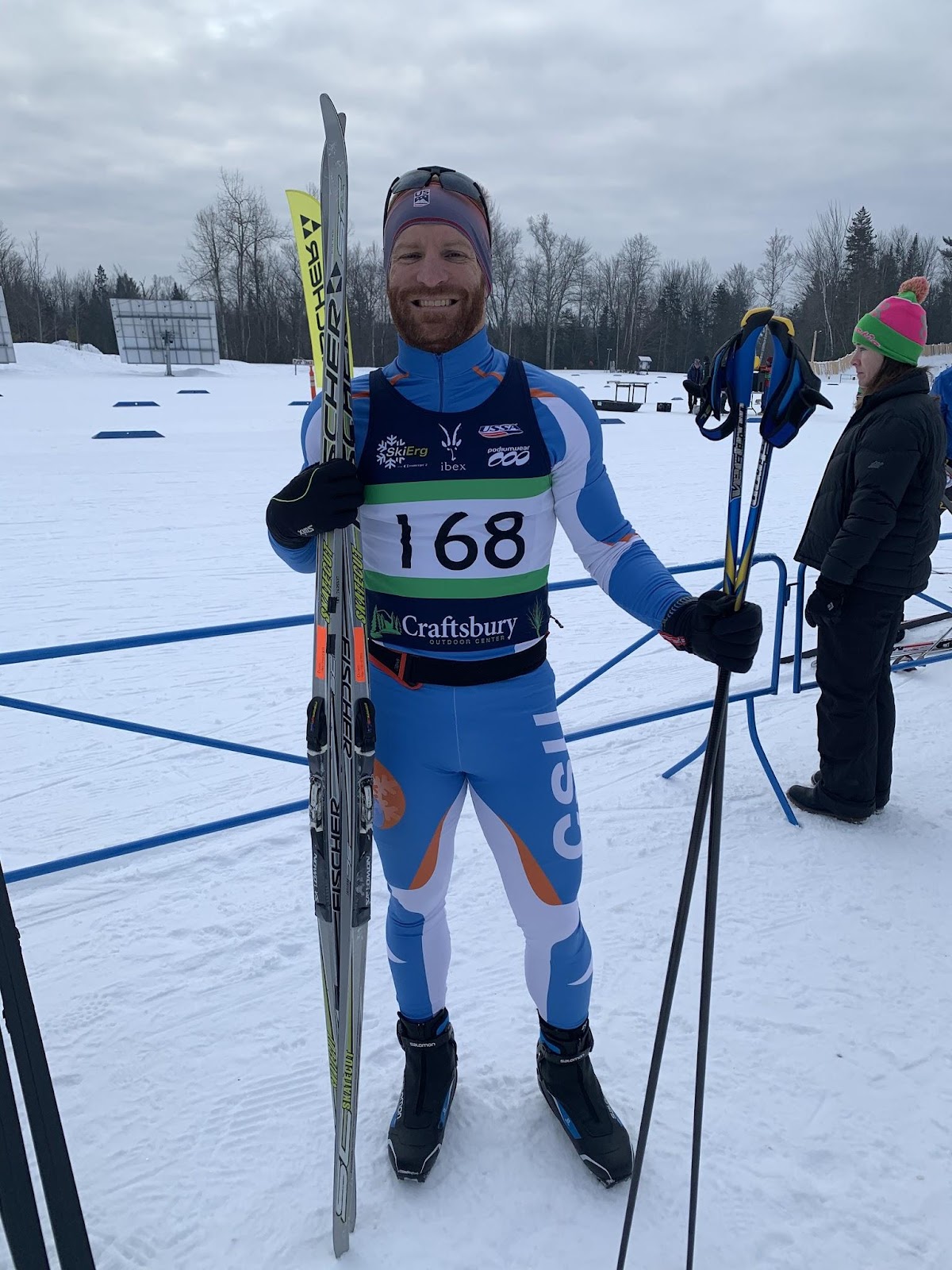 Race Day brought excellent conditions with temperatures in the low to mid twenties and really fast snow. I was one of the very first people at the Outdoor Center Sunday morning… it seems that skiers are much more relaxed than triathletes, at least before a skate race. I did a short warmup to get the legs going and scoped out the first several turns and downhills of the course. Unlike before most of my tris and sailing races, I was actually pretty relaxed before the start. The weather and conditions were fantastic, it was my birthday, and I had zero performance expectations aside from pacing and fueling well, finishing the darn thing, and hopefully not finishing last! If I have learned anything in this sport so far it is that time estimates in skiing are almost impossible because of snow conditions, so I had prepared mentally and fuel wise for a 2:15-3 hour race. I took a Clif Gel with ~15 minutes to go until the start and posed for the “before” picture.


The men started at 9am with around 180 people on the line for the 16k (1 lap) and 33k (2 lap) races. Knowing that the first mile included multiple 90 degree turns and a fast downhill into a 180 degree bend, I lined up pretty far back in the field and took the parade lap through the stadium nice and easy. I was using carbon poles for the race ($25 Craigslist win) and just wanted to stay out of trouble since it was going to be a long day. The skate marathon goes in the opposite direction of the classic marathon at Craftsbury, so the first 2 miles or so of the lap were a lot of descending. With the field still pretty bunched I wasn’t able to tuck the downhills as much as I would have liked, and I had one fairly hard fall when a racer stepped on my pole basket. Fortunately the pole was undamaged, and I got moving pretty quickly. 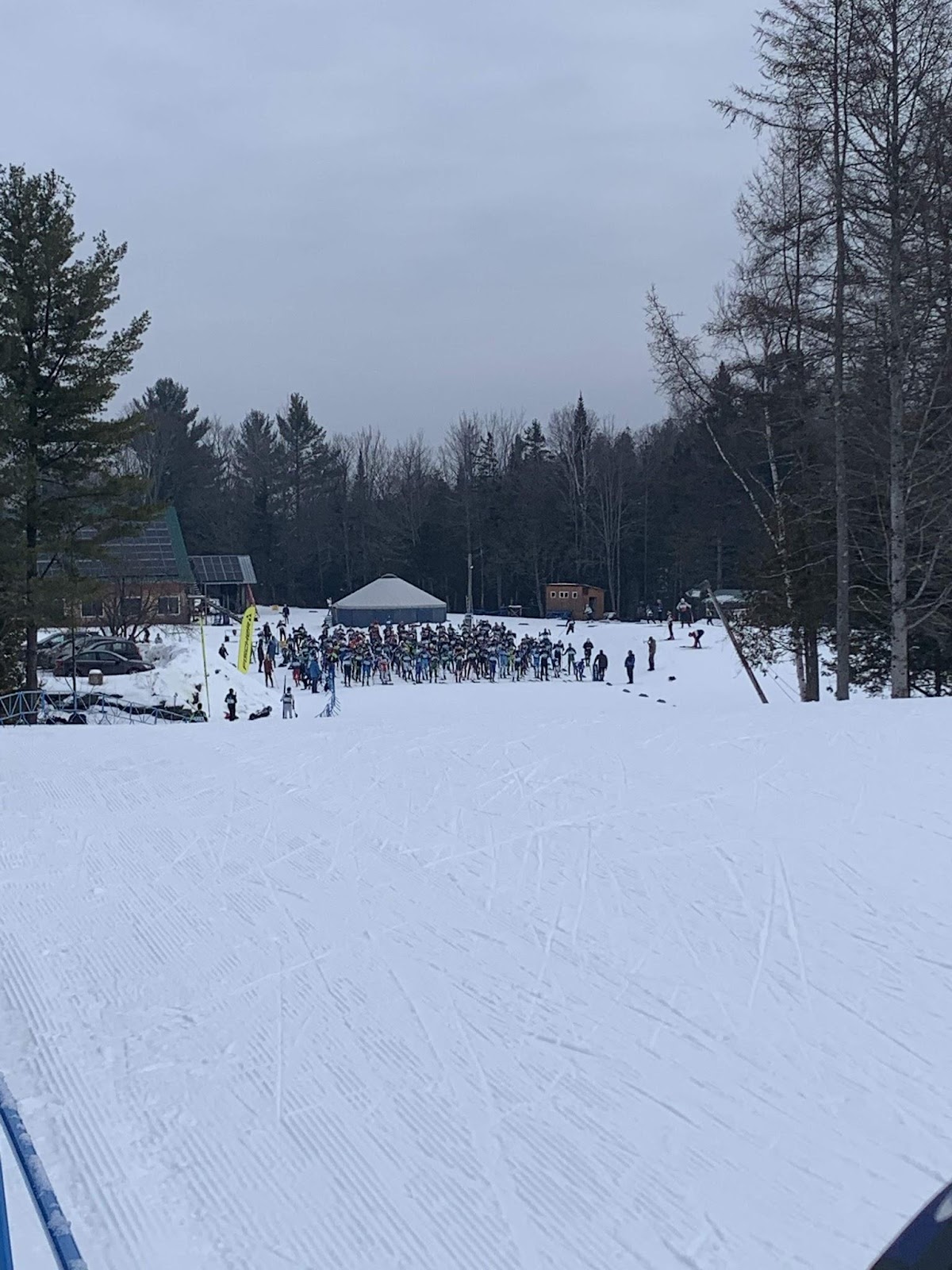 Following the initial descent to the Black River, it was a 9+ minute climb up Ruthie’s Run to a road crossing, followed by another 7 minutes or so to the highest point of Dante’s Loop. Definitely a bit different from the 20 second “climbs” at Weston! I took my first gel about 30 minutes into the race just before the second road crossing, and stopped briefly to refill my bottle at the Ruthie’s aid station. My plan was to take a gel about every 30-35 minutes and drink whenever I could easily tuck or free skate. Overall this worked well, and I was able to eat and drink without stopping as long as I was mindful of my poles. After Dante’s Loop it was a long fast descent down Sam’s run before climbing the steep S-Curves of Elinor’s run. Coming through through the stadium for the first time it was awesome to see Lianne cheering me on. She had informed the race announcers it was my birthday, which was fun to hear announced as I skied by. After a quick loop around Duck Pond it was back through the stadium and on to lap two. 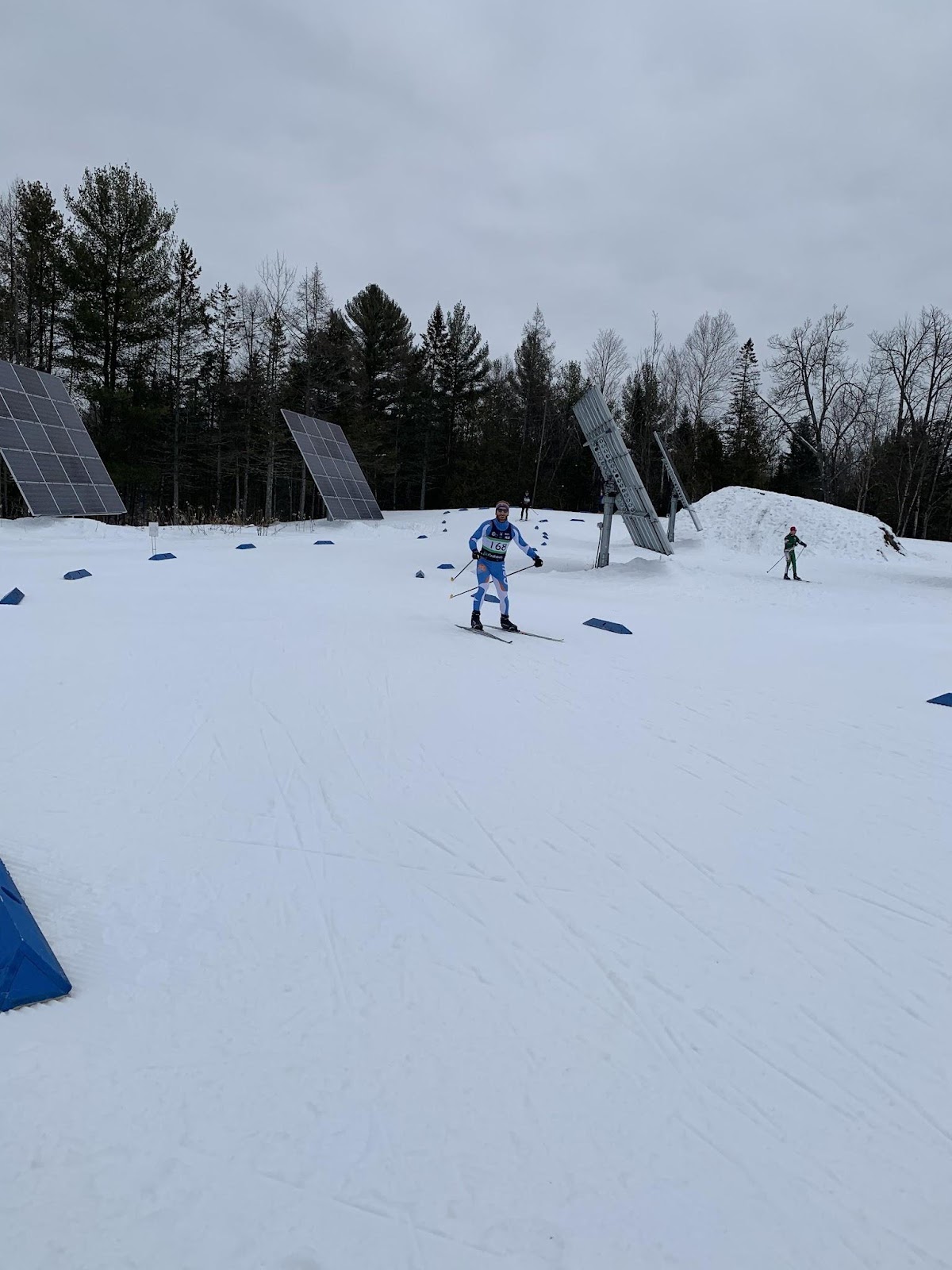 Lap two was much more spread out than lap one, partially because several of the skiers who had been near me were doing the 16k race. I was able to get in a nice, steady rhythm on the long climbs on the second lap, and despite growing fatigue my times were very similar on the climbs between the two laps. I did have a lapse of concentration and wiped out hard on Sam’s run second time down, but made gains on those around me going up Elinor’s the second time. Coming into the finish I was able to find some V2 and separate from a few racers near me, crossing in just over 2 hours. After a short cooldown (thanks to Ari for insisting I cool down), I was able to enjoy the excellent post race food offered up by the Outdoor Center. 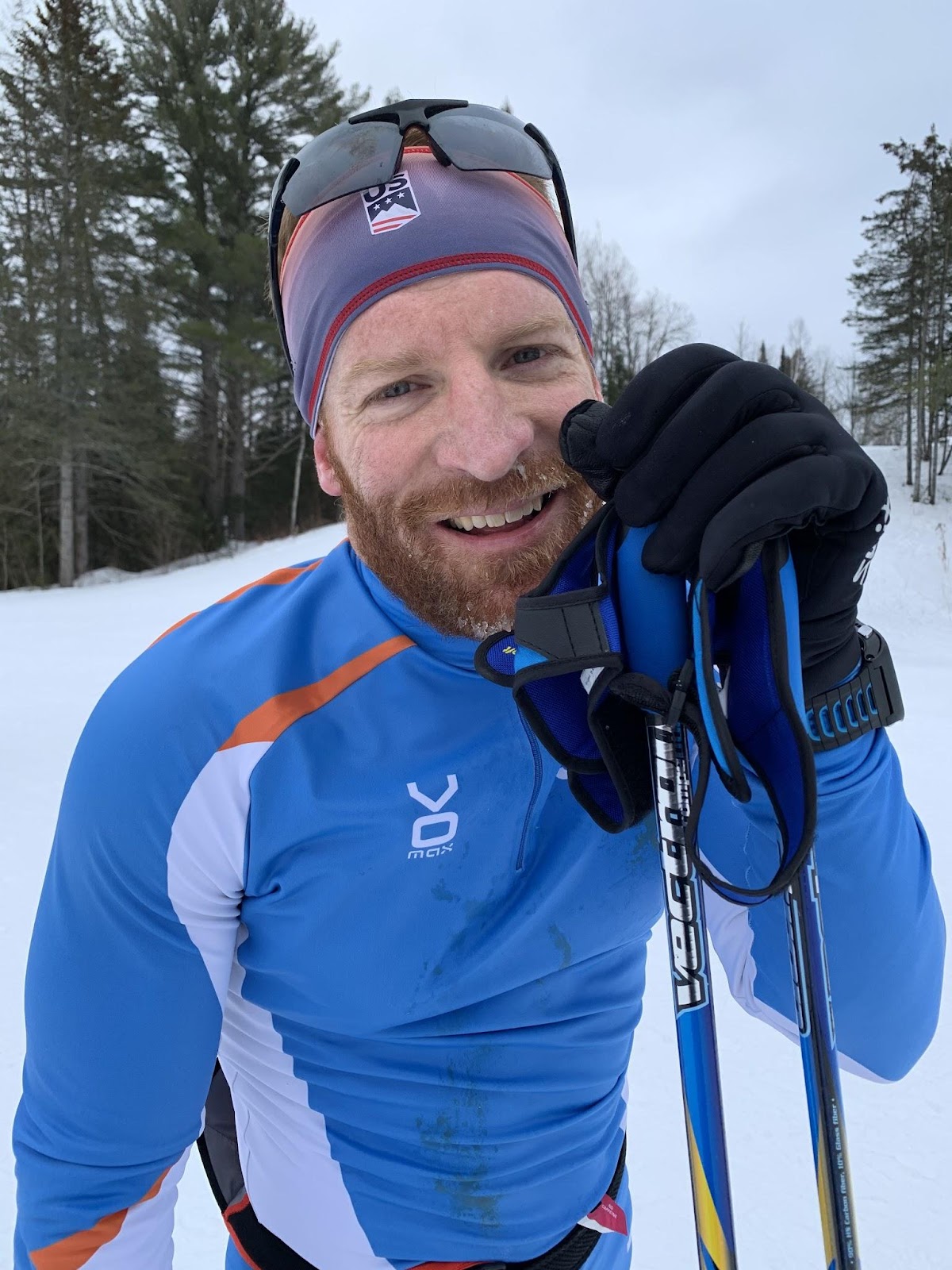 My official finish time was 2:00:26.8 for 105/134 finishers (results). While the placing isn’t all that great, I was happy with how the race went. First, I genuinely enjoyed myself. The trails were fantastic and conditions were incredible. My goals were to pace and fuel well, and I think I accomplished those goals. My two laps were within 30 seconds of each other (omitting the opening parade loop), and I felt strong up Elinor’s on lap two. My average heart rate was 165, so perhaps I could have pushed harder, but I avoided a hard bonk. I know I have a long way to go with both technique and ski-specific fitness, and my gear is very beginner oriented.


I look forward to racing another distance race this season, perhaps the Long Hall Loppet or the Craftsbury Spring Fling, not sure yet. I’m really enjoying the Tuesday night races, and might move myself up to the first wave in the coming weeks.


I’m also hoping to take some lessons over the next few weeks and really focus on my technique. If anyone has recommendations for a good coach, please let me know.

Huge thanks to Lianne for driving up from Mass on Saturday night just to stand in the cold and watch me ski by a couple times on Sunday! She also took the pictures in this report. Thanks to Ari and Christine for making the drive home on Sunday a lot of fun and keeping me awake.


Huge thanks to John Sakalowsky and Rob Bradlee for answering a lot of newb questions about Craftsbury, waxing, and ski racing in general over the last couple months. I really appreciate all of the help as I learn a new sport. Also thanks to Colin Santangelo for encouraging me to join the Tuesday races!
Posted by Jamie No comments: