A large contingent of CSU Jrs. headed north to Vermont this weekend for the first big weekend of racing of the new season.  First stop was Craftsbury for a skate sprint.  Craftsbury barely had enough snow for the race, but the course they put together held up very well and was very spectator friendly and fun as you could watch virtually the entire race on the twisty, windy course.  Six J2s qualified for the elimination rounds but no one in the older age groups could qualify, in large part because the field was completely stacked with all the college and elite club racers.  The elimination rounds were really fun to watch with close races in nearly every race.  In the J2 girls A final Cate Brams, Julia Kern and Zoe Snow toed the line with Cate taking charge on the first tight corner.  Cate stayed in the lead for the entire race but was challenged in the finish straight by Julia Kern with Zoe Snow not far behind for a CSU sweep of the podium!!  Then, in the B final, Rebecca Smith took off, also establishing a lead by the first corner and lengthening the lead on the downhills.  Rebecca was getting hauled in on the finish straight until she fired up and awesome V2 and put the race in the bag.

On the J2 boys side, Hamish McEwen took a big lead by the first corner and tried to put Stratton skier Tyler Foulkes way but Tyler hung tough the entire race.  Tyler put on a great sprint and overhauled Hamish, who finished second.  In the B final, Chris Koziel  hung tight with the two leaders finishing in 3rd for 9th overall.

Today was a classic day, with the races moved to Jericho to the Ethan Allen Biathlon Range, which had quite a bit more snow and excellent conditions.  In the J2 races CSU again dominated, with leaders switching around.  In the boys race Hamish took a commanding lead right from the start and was not challenged the entire race.  Chris Koziel came home 9th again and Max LaChance moved up to 10th while Sean Skahen was 19th and Jacob Meyerson 21st.  On the girls side, Cate was in a tight race the entire way with Heidi Halvorsen and Brooke Mooney.  The race came down to a double pole duel with Heidi prevailing by 1.3 seconds over Cate.  Following closely behind was Julia Kern in 4th, Zoe Snow in 7th and Rebecca Smith in 8th.  In the women's race Hannah Smith got knocked down in the mass start which set her back, but she moved through the field to finish 32nd.  Katie Innamorati, home from college with 0 days of skiing under her belt skiied well to come home 95th.  In the men's race, Eli Hoenig had an excellent race, moving up the entire way in the mass start field, finishing 42nd and 2nd J1.  Chris Burnham was 98th, Rob Bradlee, starting in the Masters wave 102nd, Neil Garrison 124th, Greg Holdman 130th and Evan Doucett, home from college and skiing his first race in 3 years 139th. 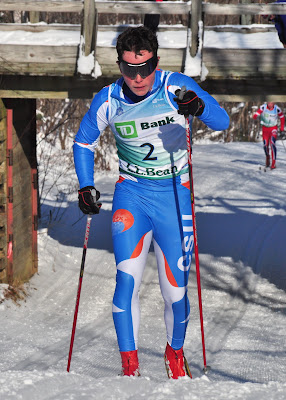 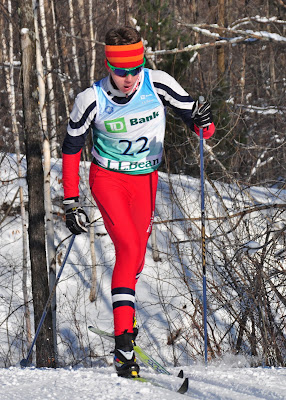 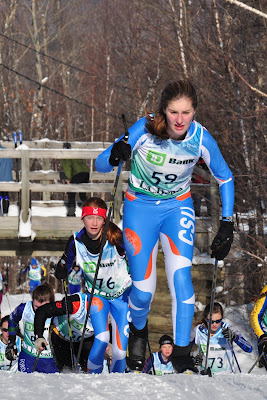 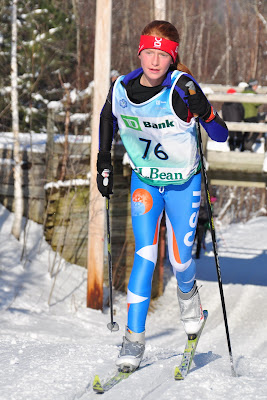 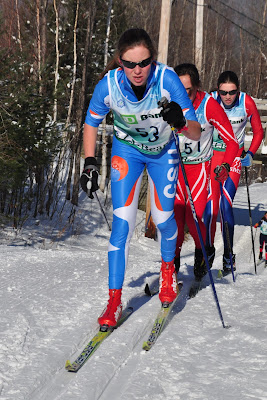 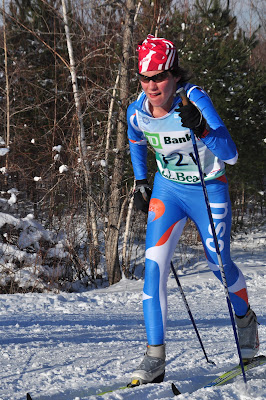 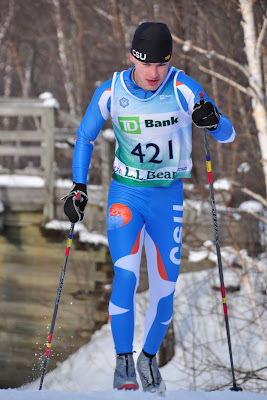 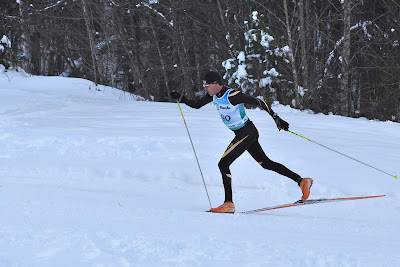